How to Make an Animated GIF in Procreate with Sonia Yim 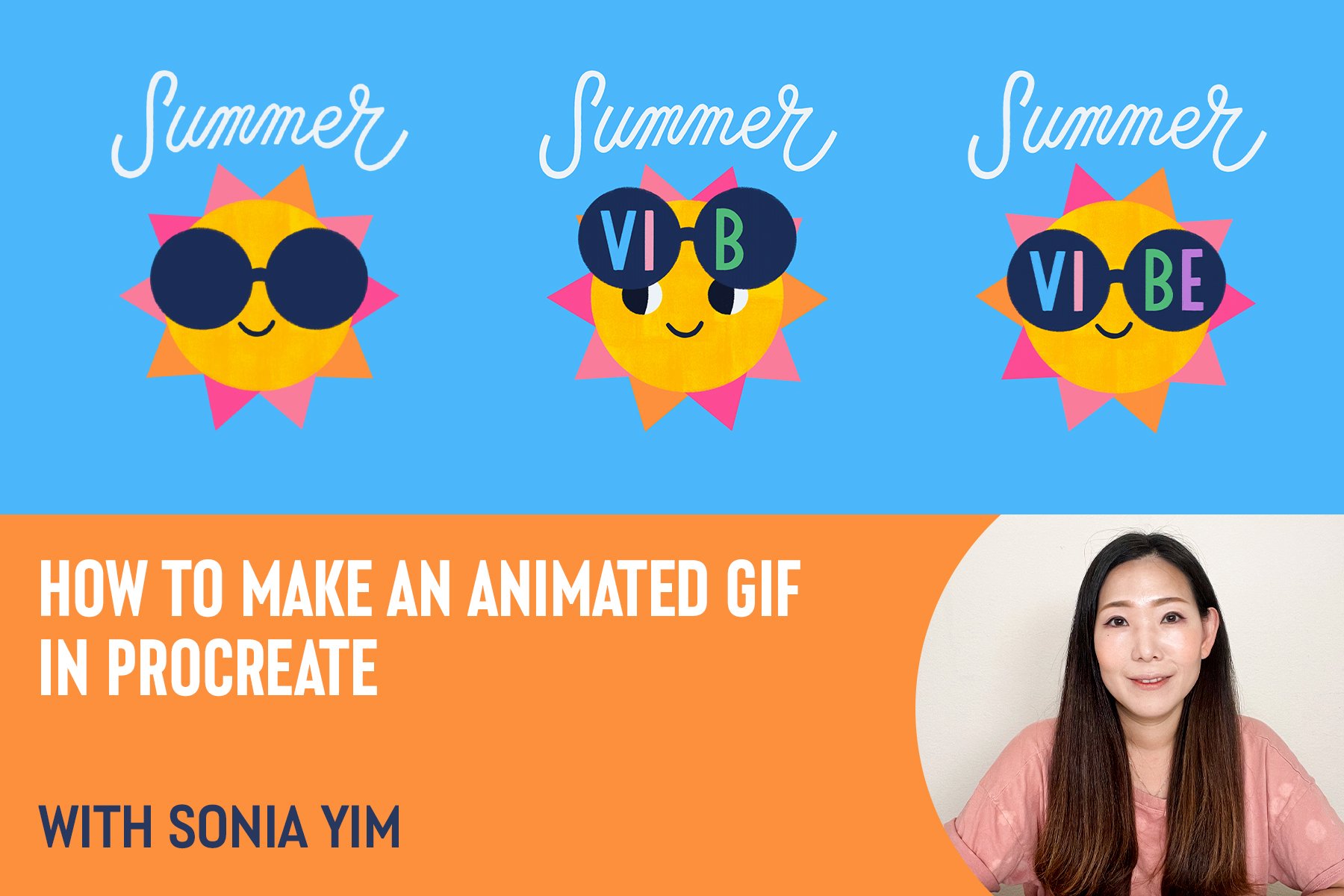 In this session,  we were joined by illustrator and lettering artist, Sonia Yim. Sonia showed us how to make an animated GIF in Procreate with the use of her hand-picked packs from Design Cuts.  She focused on creating a sun using a sketch and then applying animation by setting and moving frames step by step. She also shares her thought process, organising layers and easy tips to create a cute GIF.

Check out the awesome resources used in this session! 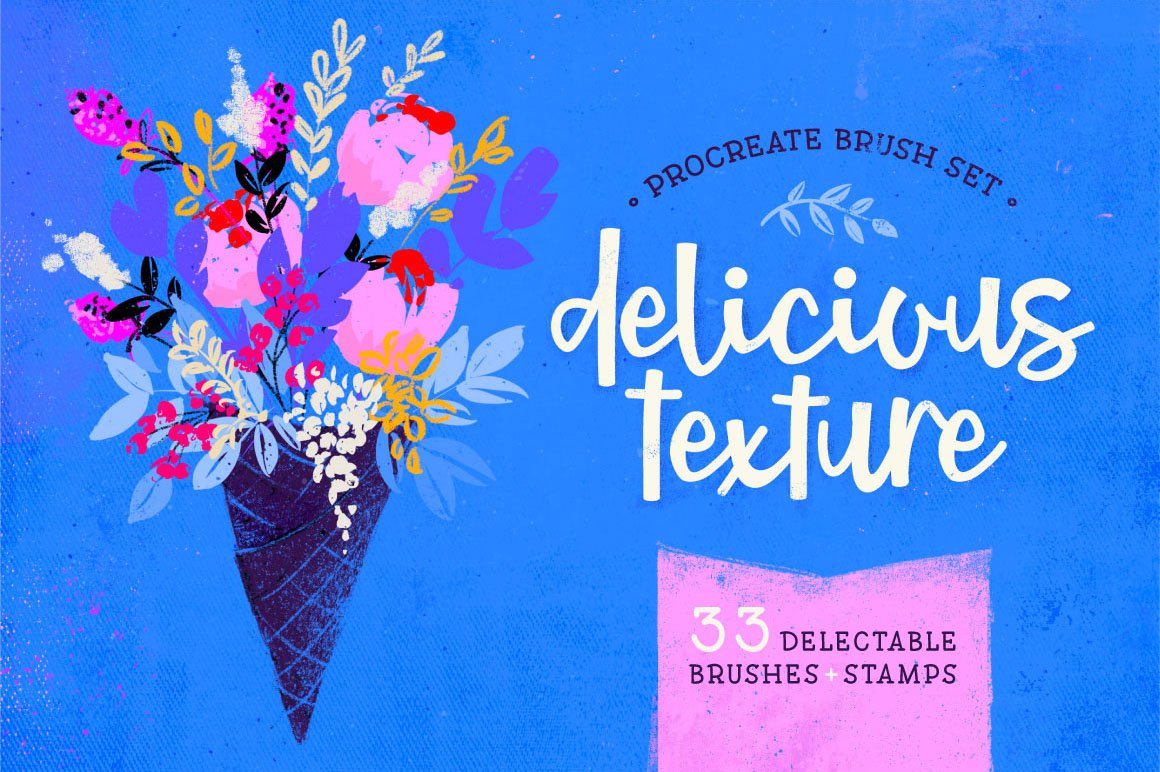 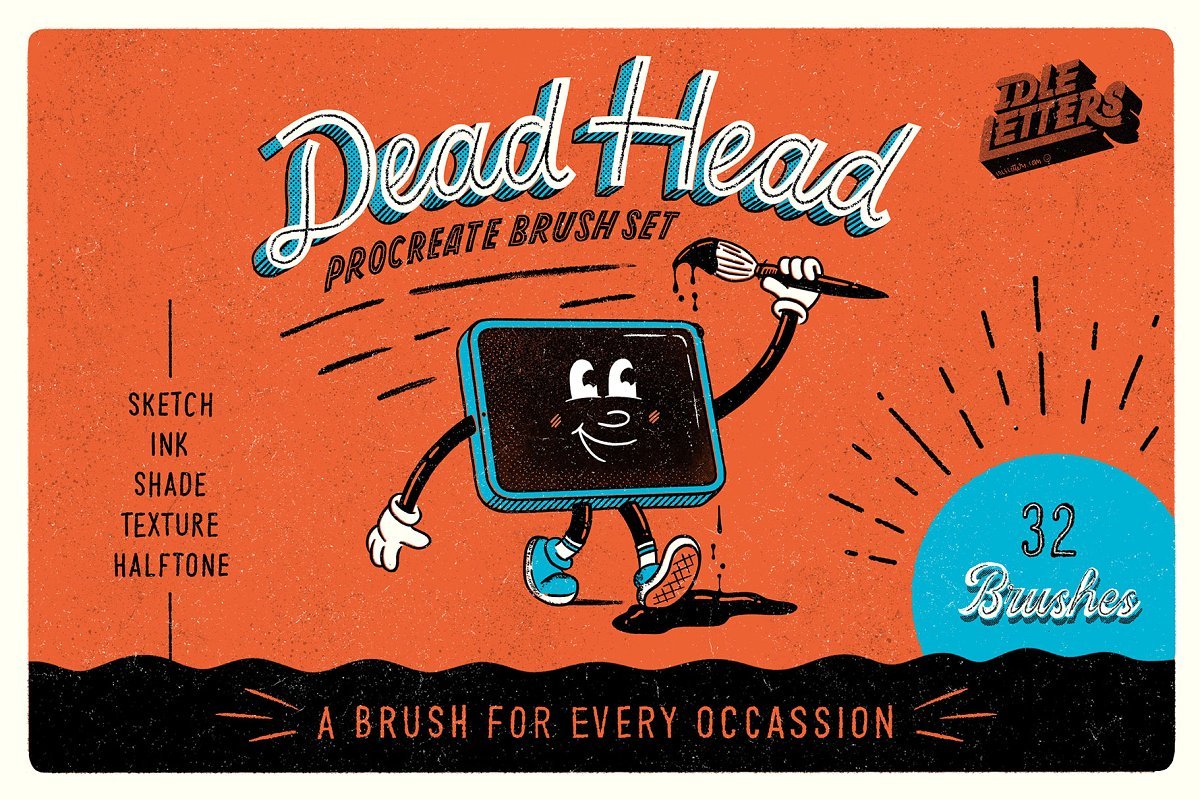 To help you follow along, you can use the written tutorial below.

Select a sketch that you want to animate. Sonia uses a sun character sketch that she created. Choose a new layer and move it below your sketch layer. 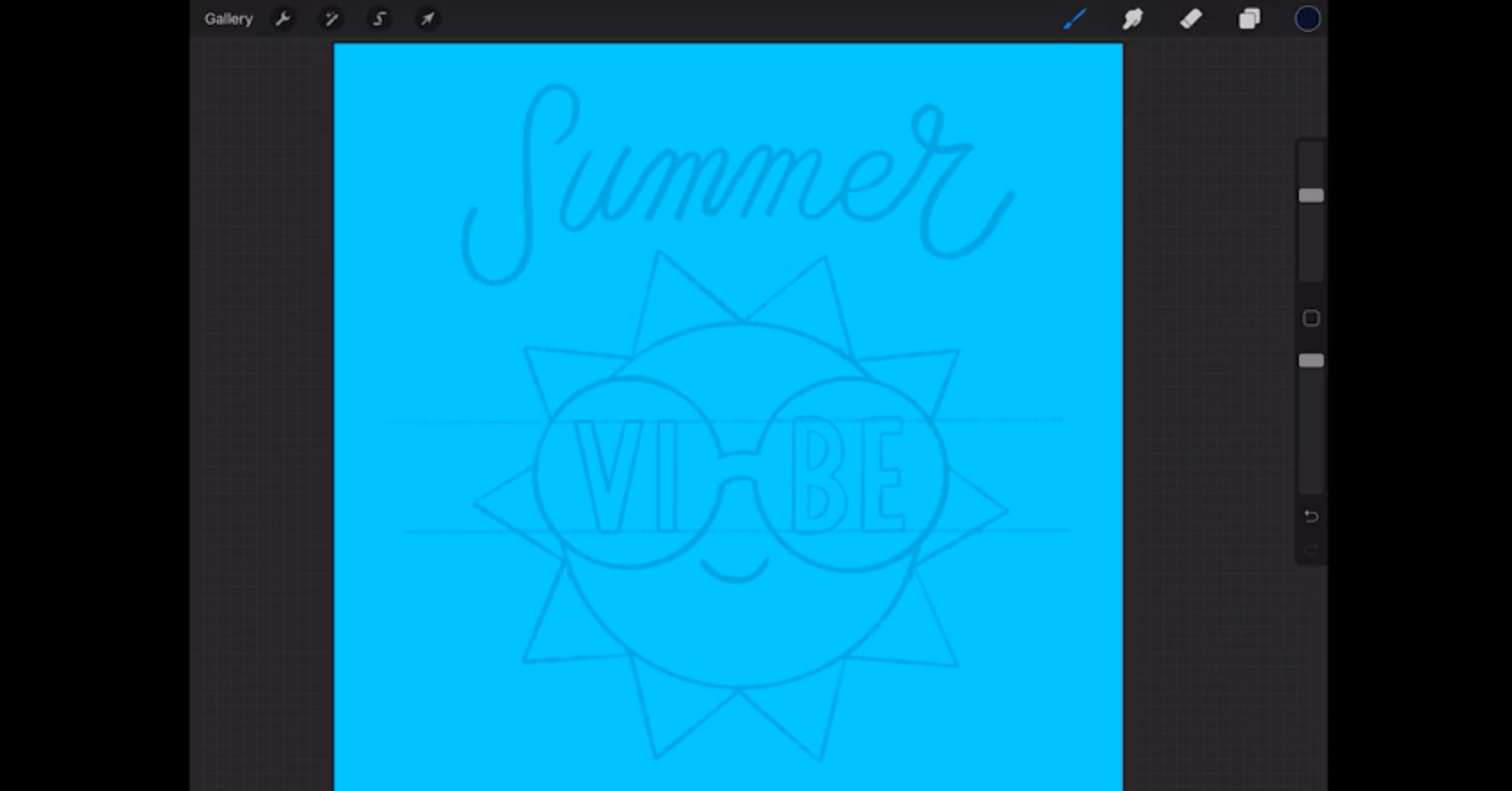 Create an outline of the entire character by using No Sweat Brush from Dead Head. Select yellow color and hold the circle down with your finger to make it a perfect circle 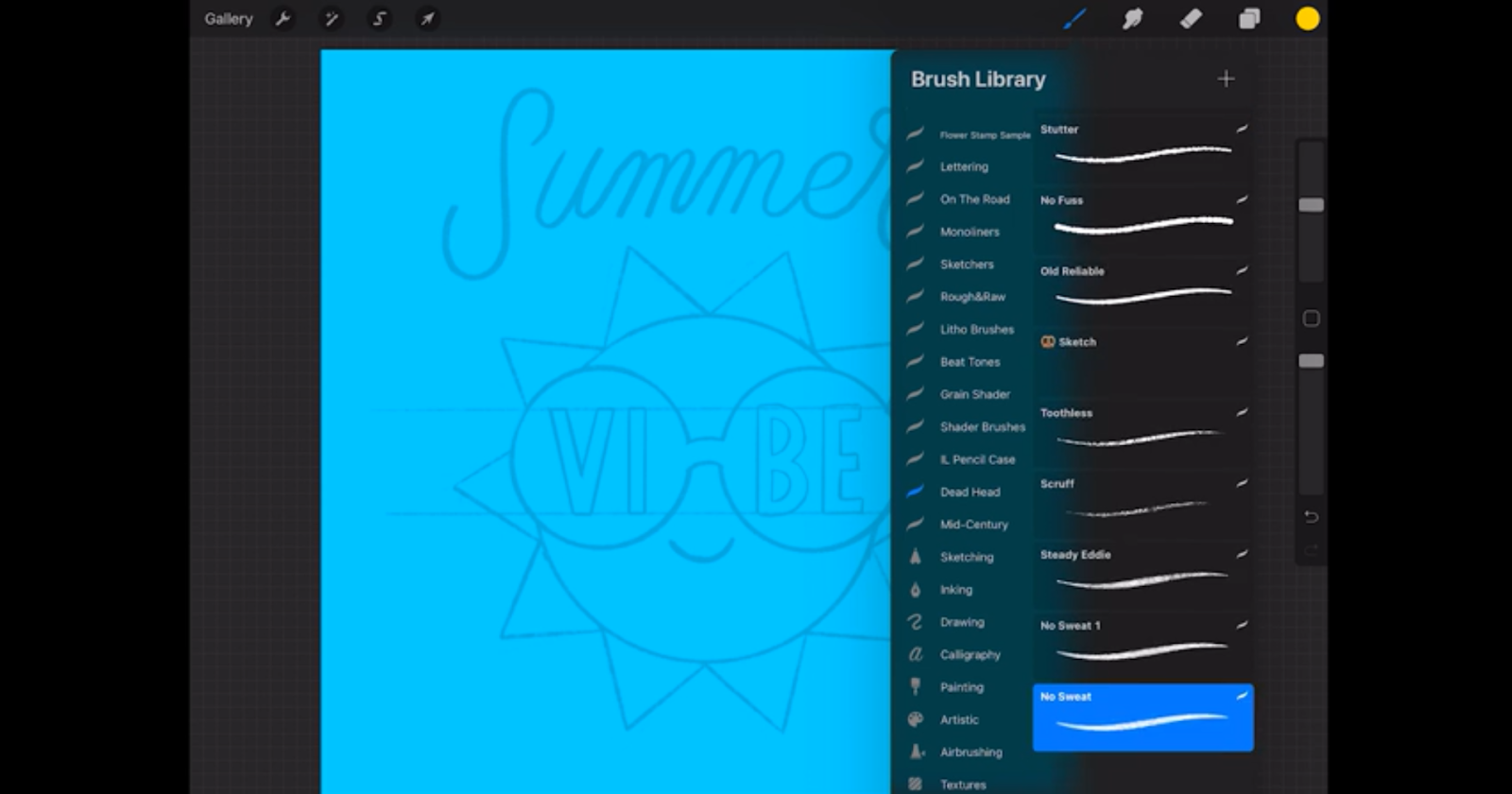 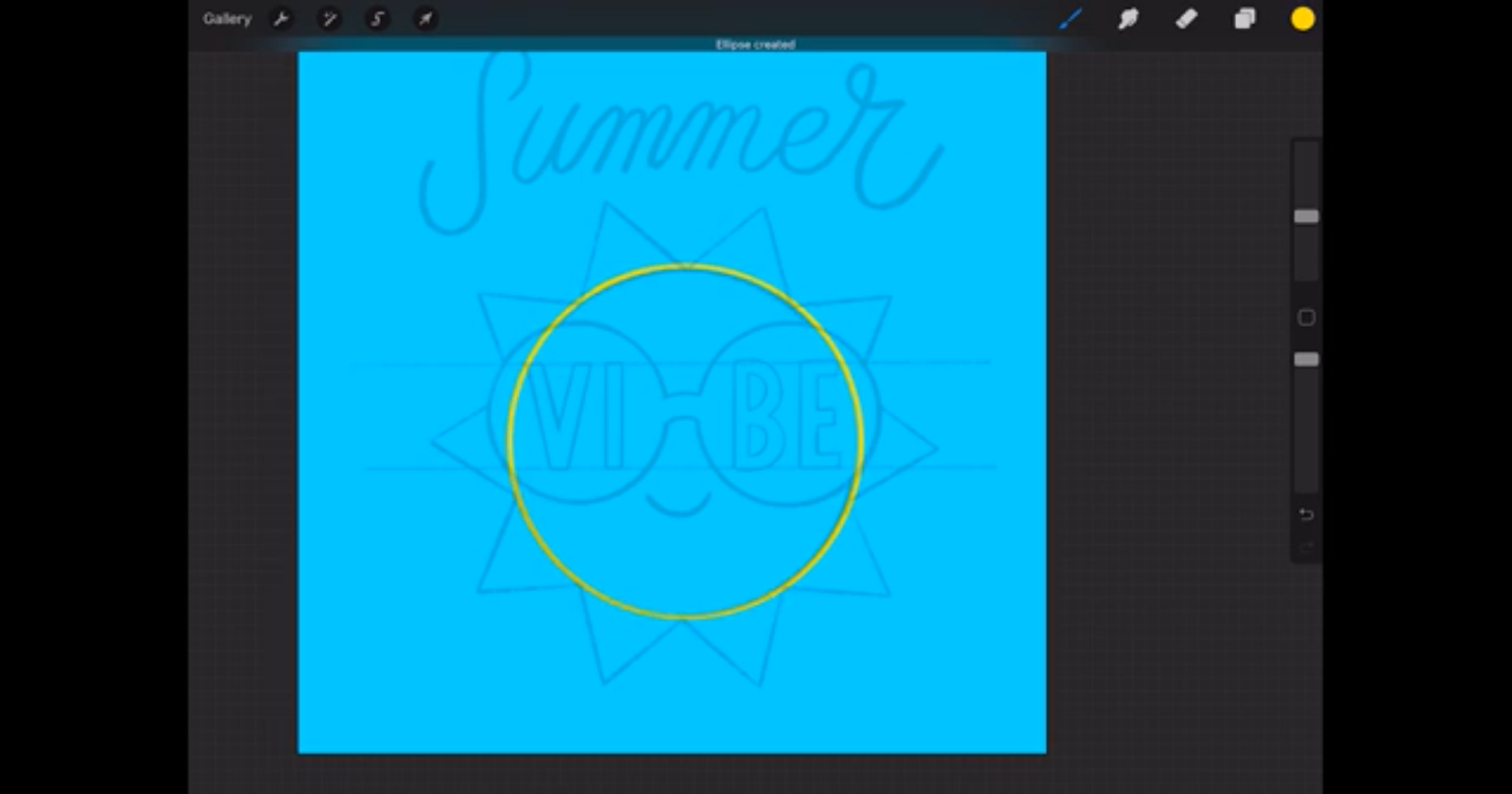 Pro Tip: Draw everything in a separate layer. Although you might not end up animating it, you can merge or delete it later instead of drawing it again.

To draw sunglasses, create another layer on top of the sun, and outline the sunglasses using No Sweat Brush and color it blue. Duplicate the layer to create the right side of the glasses. Another thing if you want to move the left side of sunglasses, exactly right next to it, use the snapping option. Merge both sides of sunglasses as one layer. Draw the middle part of the sunglasses. 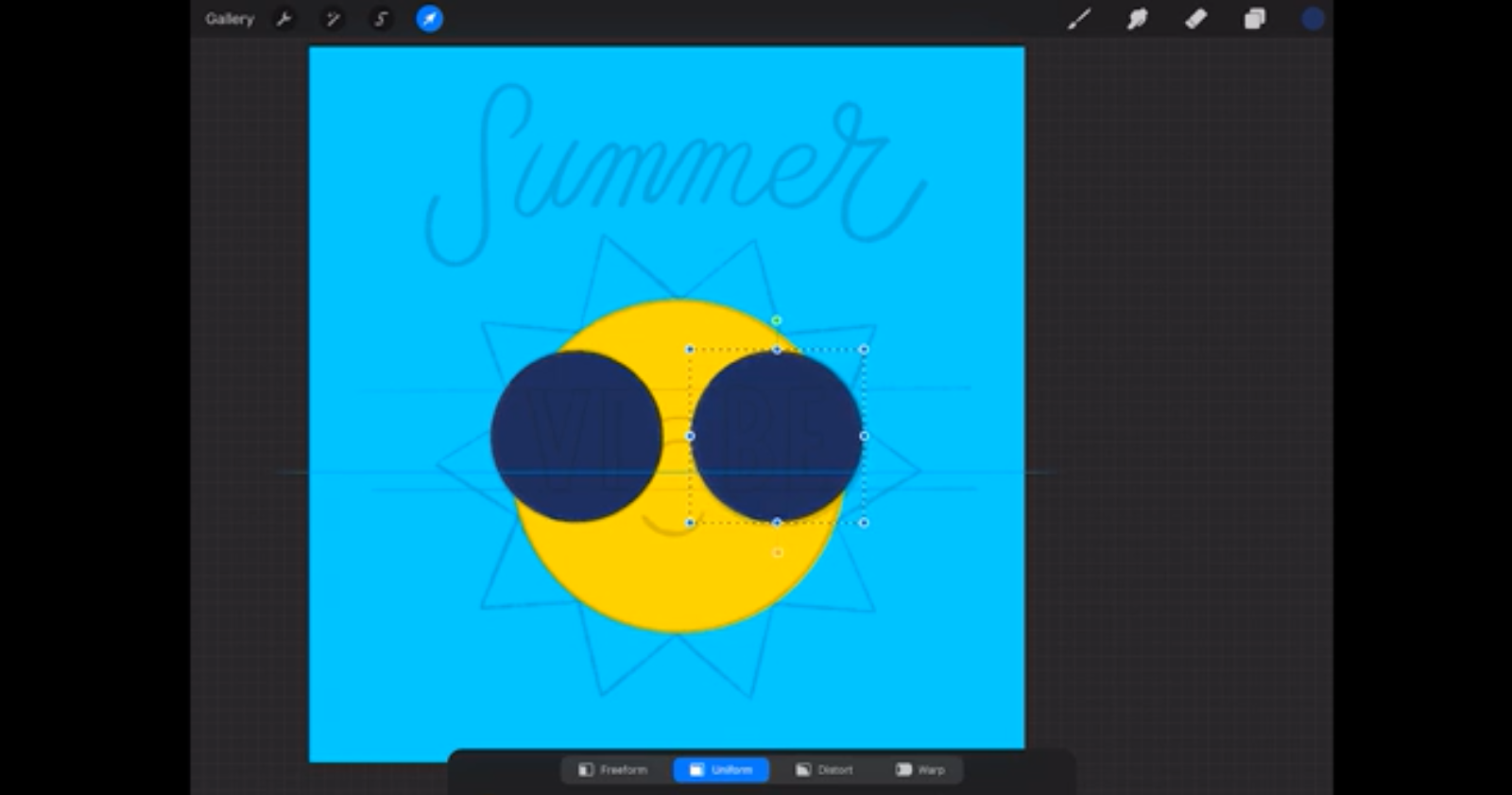 Form another layer. Outline your letters and fill them. Color V, I, B and E with different colors in separate layers and draw the sun’s face. Outline the flares by creating another layer behind the sun and use a selection tool. Choose freehand and fill up the flares with different colors in the same layer. 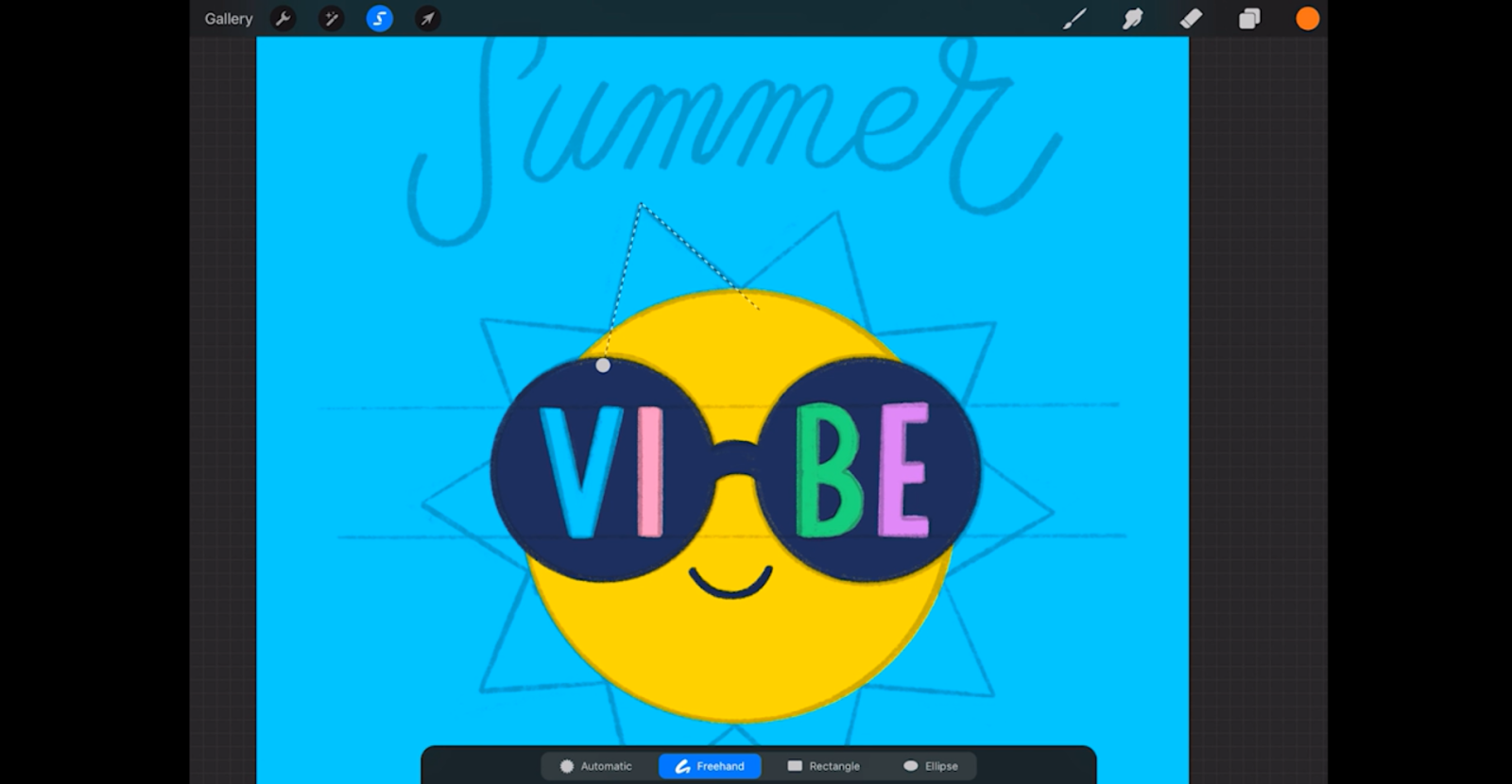 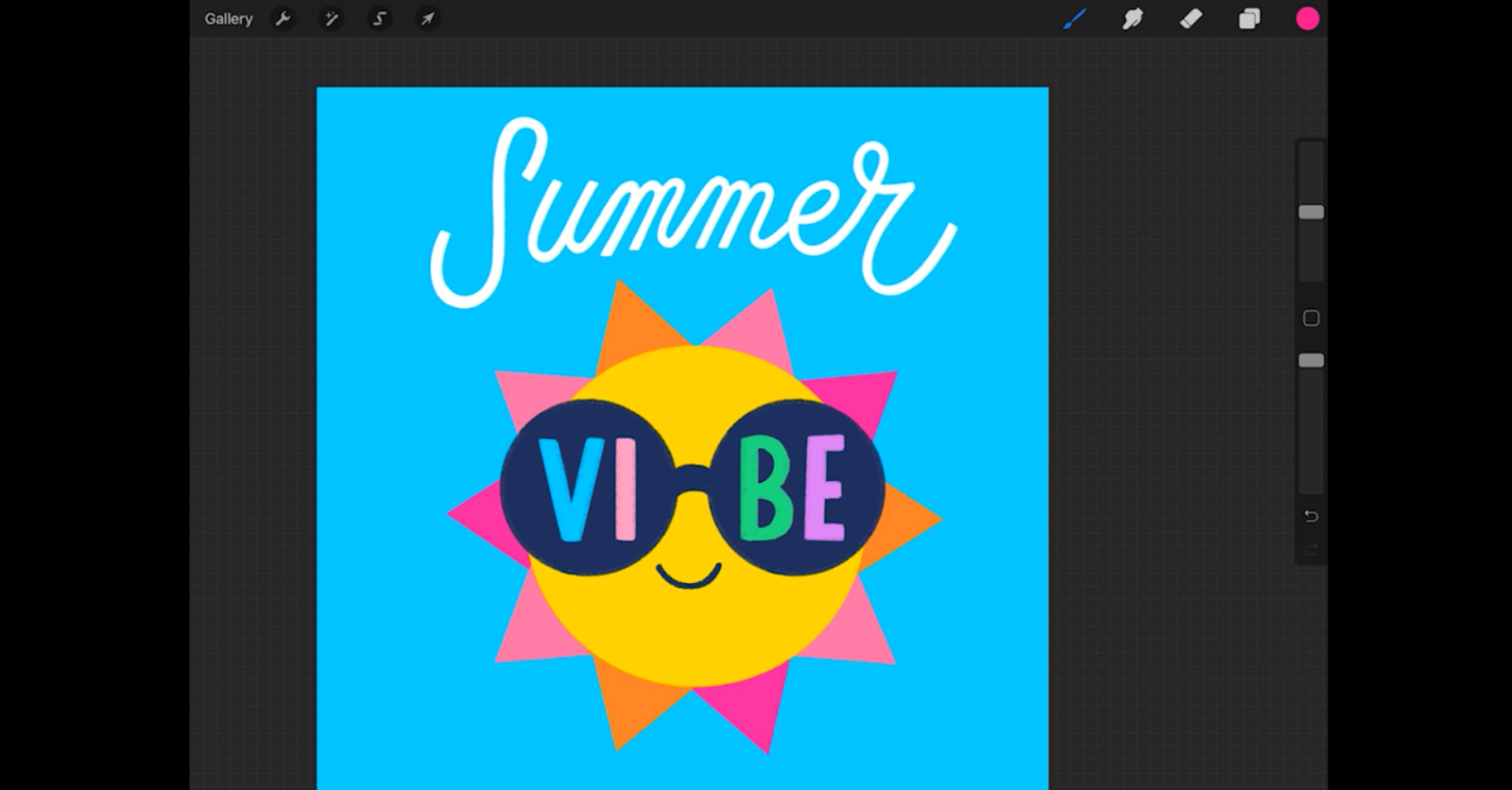 After you have filled the sun with colors, think about animation. Before you animate, you want to know how the final image will look like. Letter your summer. Switch off the sketch layer and group all the other layers together. Rename the new group to “original”. 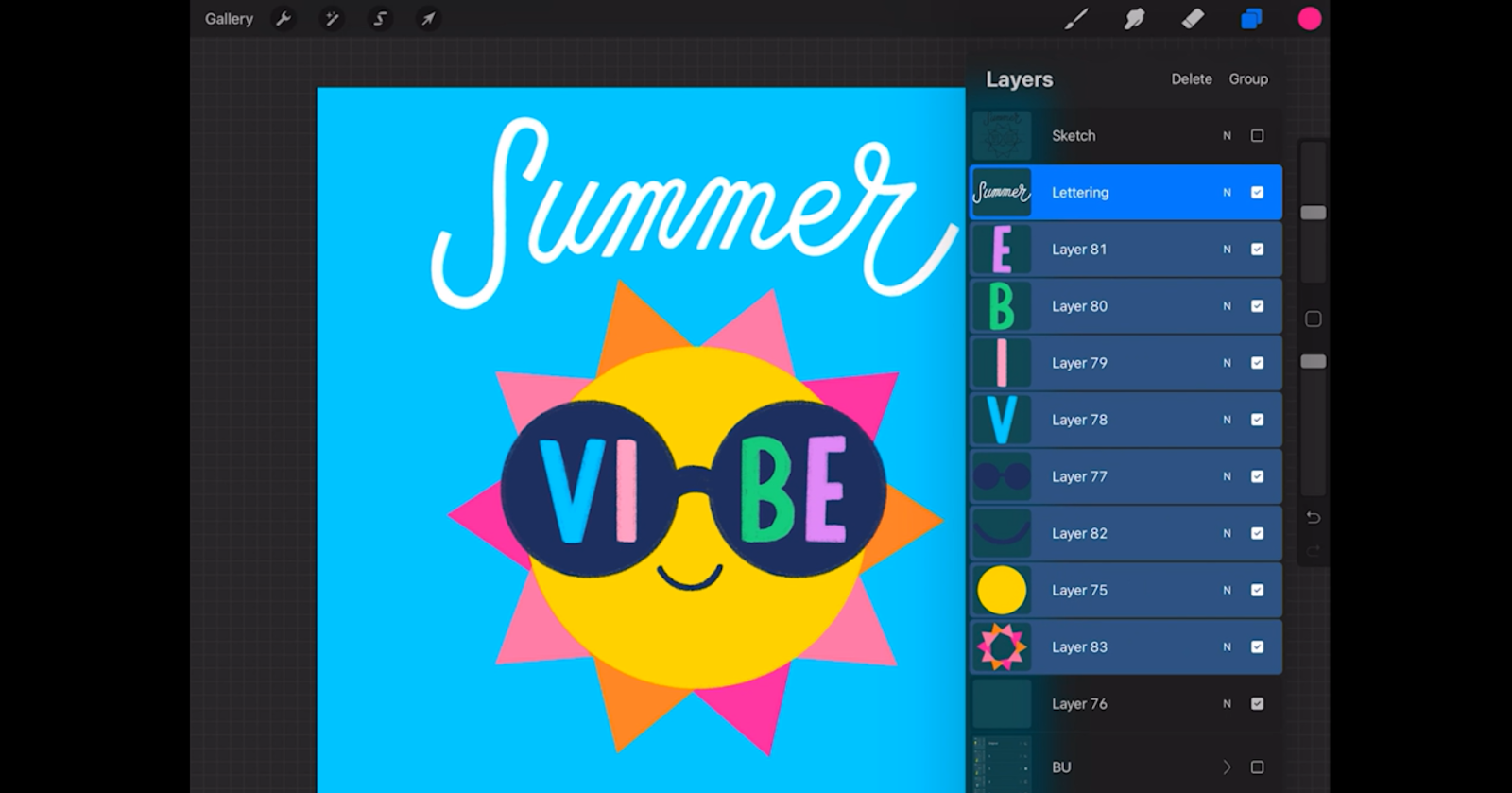 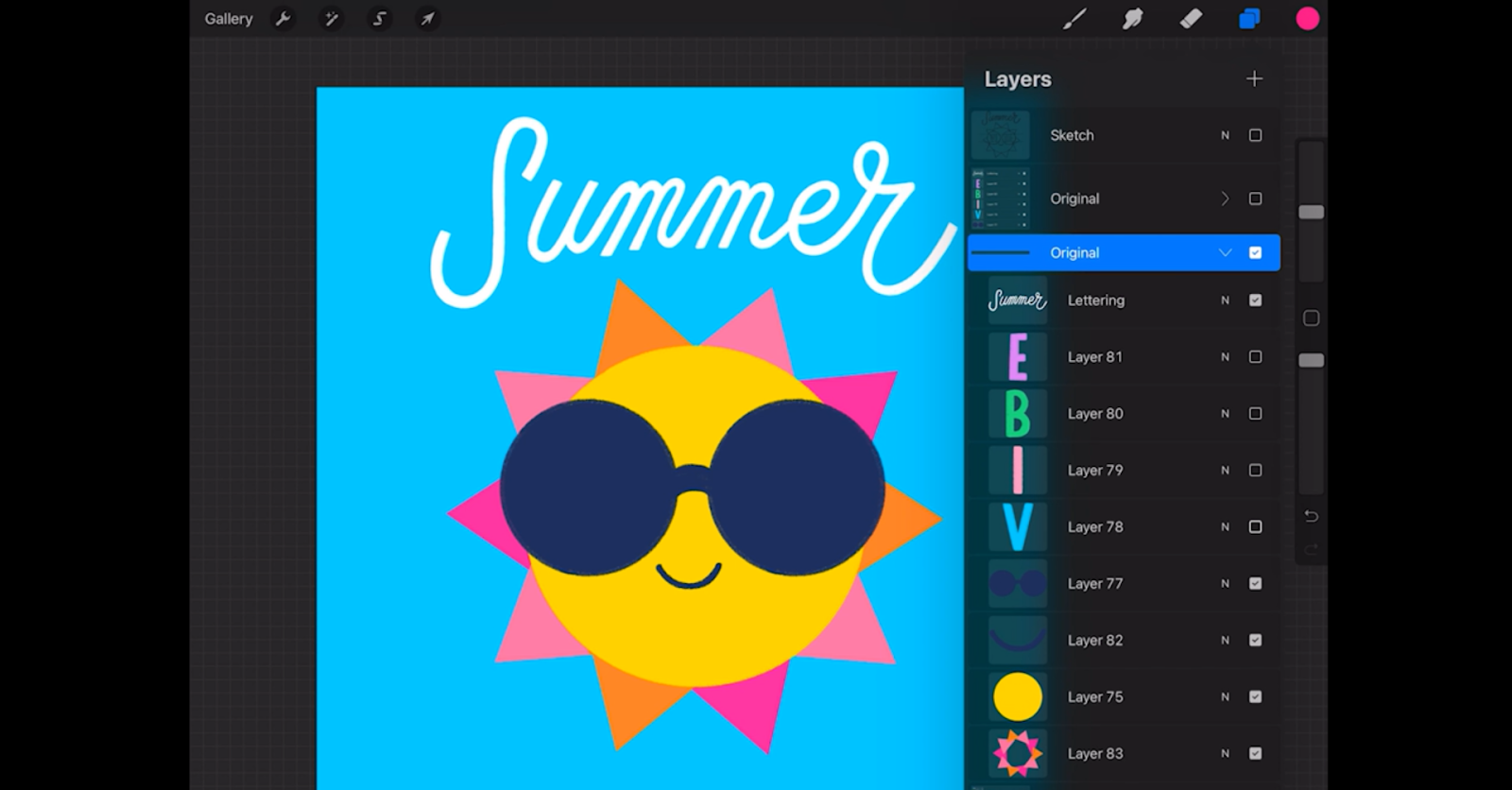 Pro tip: Always have the original because that's going to have everything you need.

From this point, you could start thinking about which part you want to animate. Each element in the drawing has the potential to be animated. In this case, you can rotate sun flares. Another thing, you can animate is lettering which shows up instead of having a vibe visible right away. You could also animate sunglasses by making the sunglasses move up, showing the eyes of the sun and then making it move down.

When you're doing your own thing, think about what you can do. Think about each of them one at a time. Instead of thinking about doing everything, you can ask yourself if the element in character has the potential to animate? Does a sunglass have the potential to animate? Or even you could change the smile. Maybe it could open its mouth and close it, and then when you actually animate, you do it one by one.

Animate and Test Your Elements

Before you begin to animate, start setting it up. Always keep the original and work on a duplicate layer. 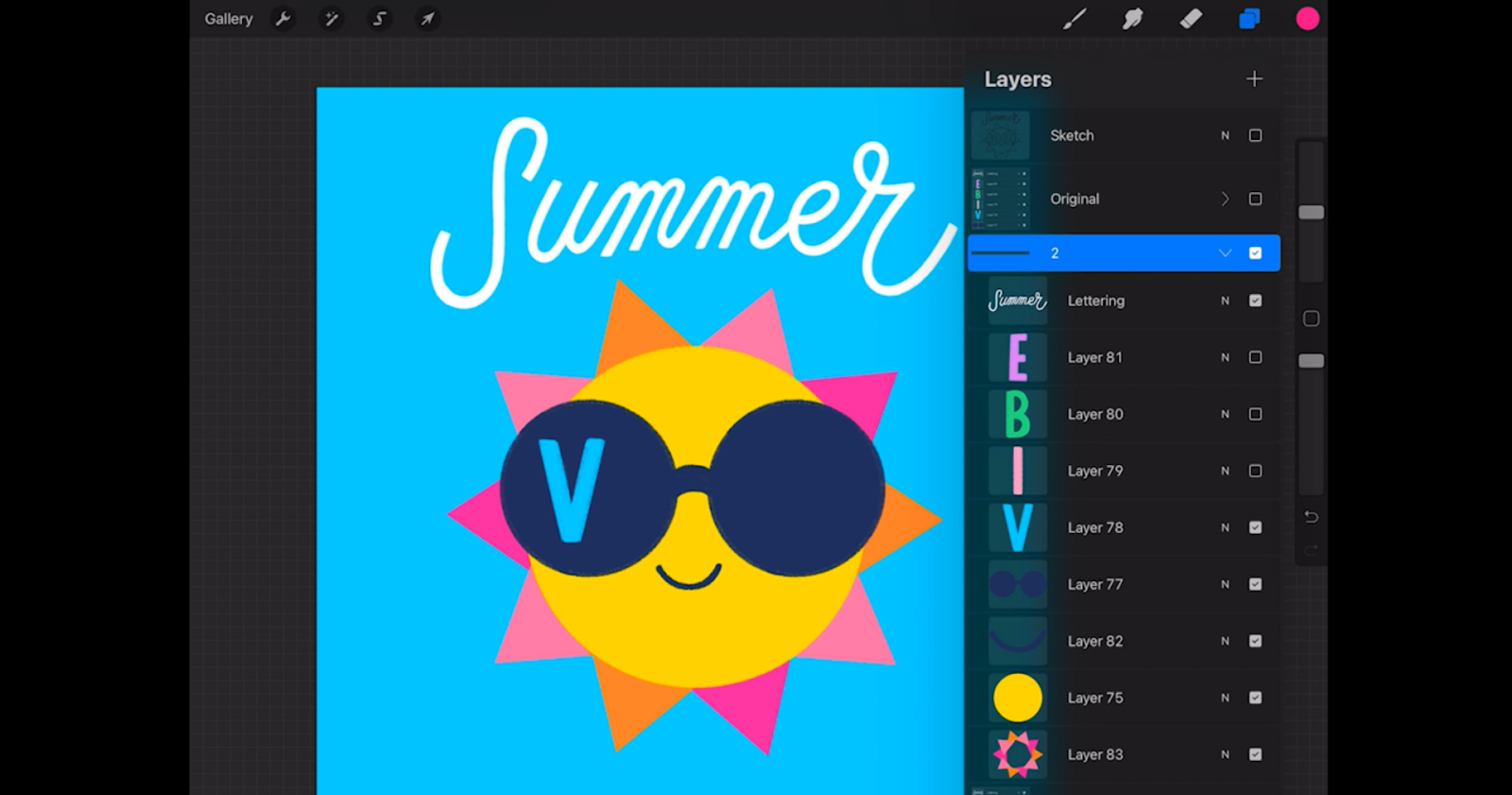 Pro tip: Make sure to organize layers properly as in GIF labelling is essential.

Go to a second frame. Select the letter V layer because we want V to show up. Switch off the other layers of I, B and E. Duplicate layer 2 and rename the newly created frame as 3 and select layer I. Go to the second frame again and delete layers I, B, and E.

Pro Tip: Always make sure you're duplicating the recent layer, so you don't have to get rid of everything.

The second element is to animate flares. Switch off other layers and click on the second frame. You want the orange color to come to where the pink is by rotating. Turn on both the second and first frames.

Select the area and rotate the green dot on the very top. Orange is going to go where the pink is, as shown in the image below. 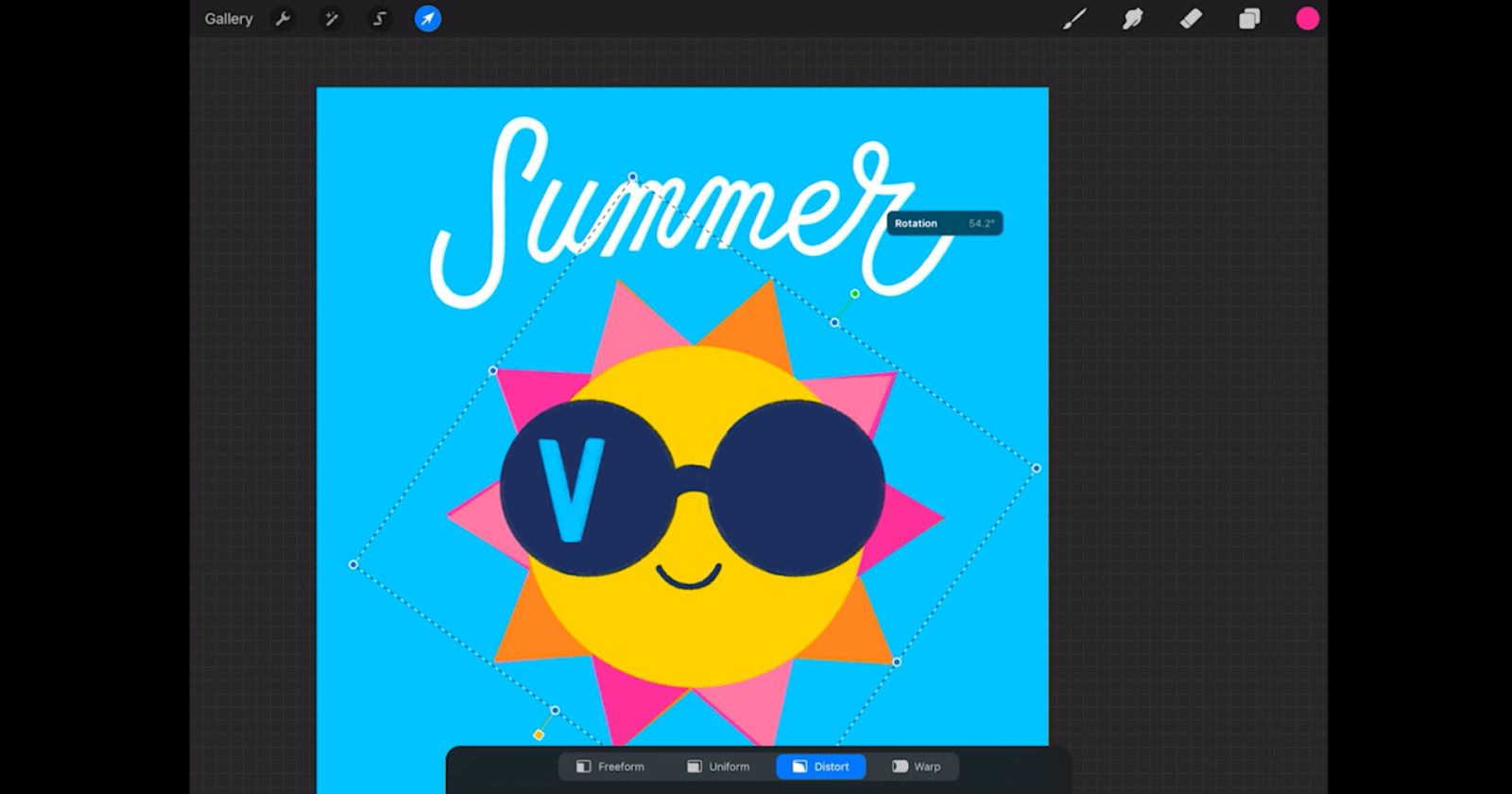 If you go back, you can see that the color has been rotated in the second layer. It doesn't matter if it's not perfectly lining up with what's underneath. You can make it that way, but it doesn't show too much when GIF is playing. Sometimes imperfection makes GIF a little bit better. Similarly, repeat this till frame 6.

You can always test it out before you go forward. Go to the icon on the right side of the Gallery. Click on the canvas section and turn on Animation. On the bottom, you can see the frames. Turn on all six layers. 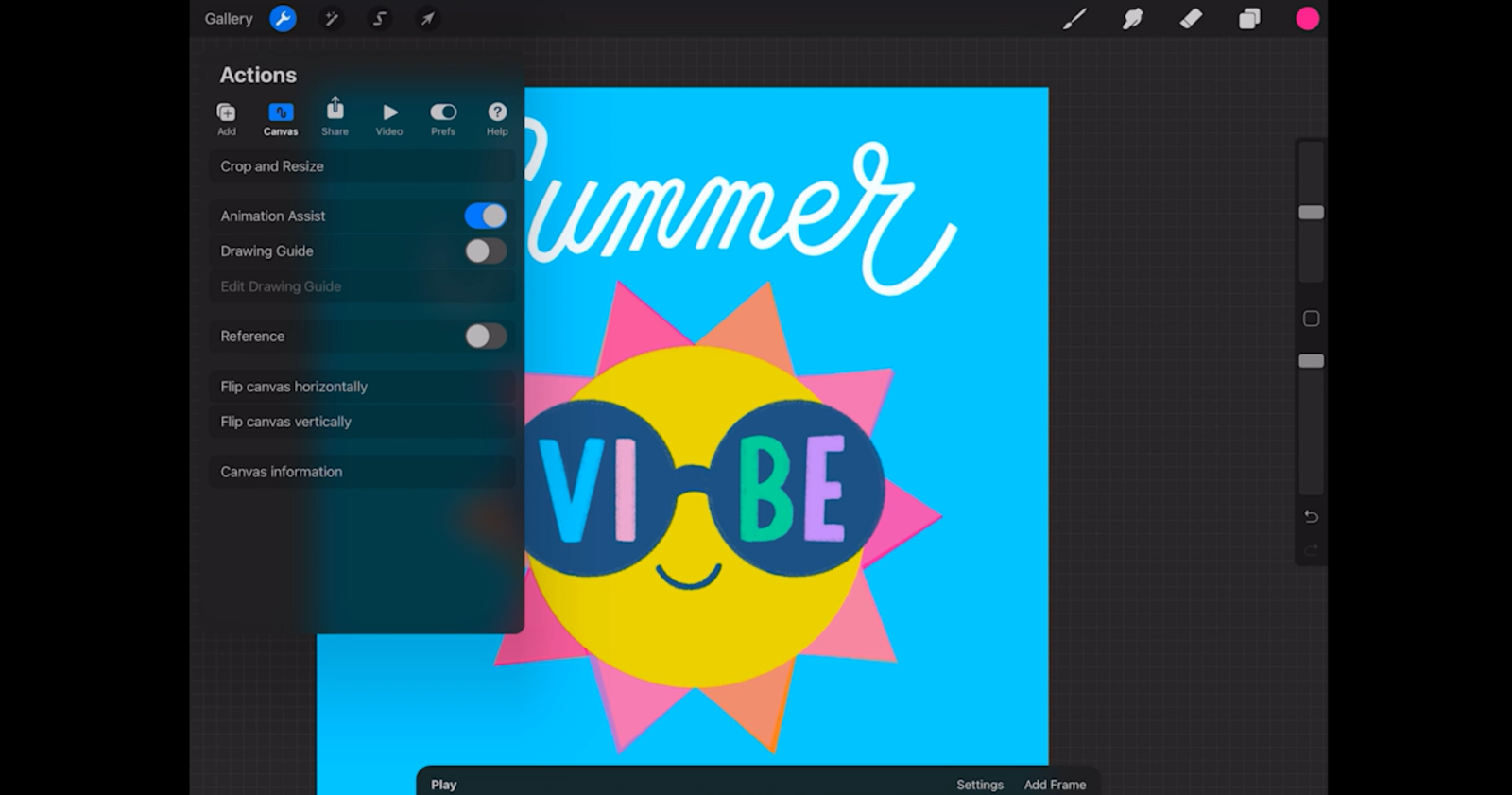 Pro tip: Check before you move forward to see how your animation looks. 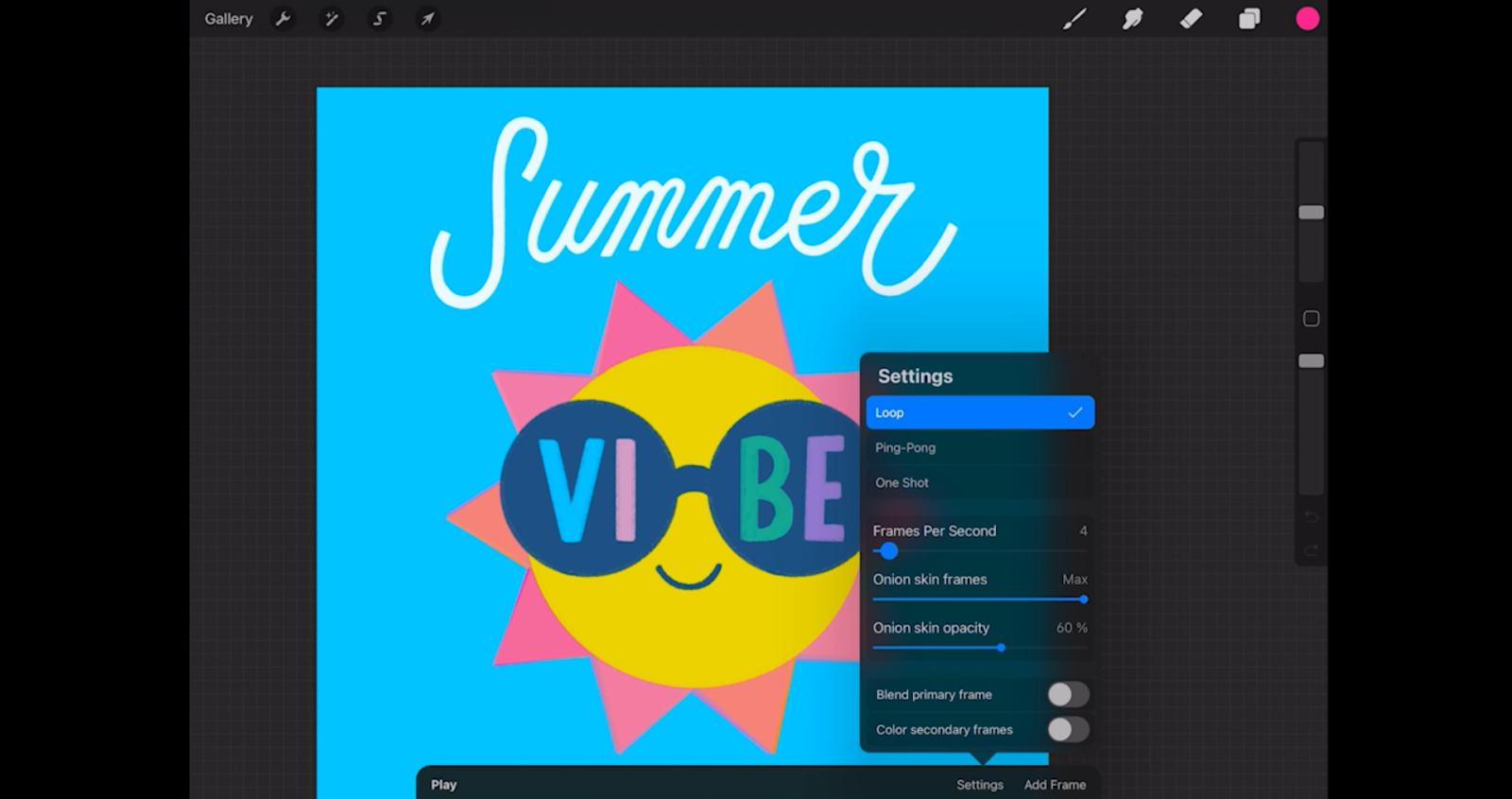 In the left bottom corner, use Magnetics and move the sunglasses up. Make sure you grab the V together. Select both to move V and sunglasses up. 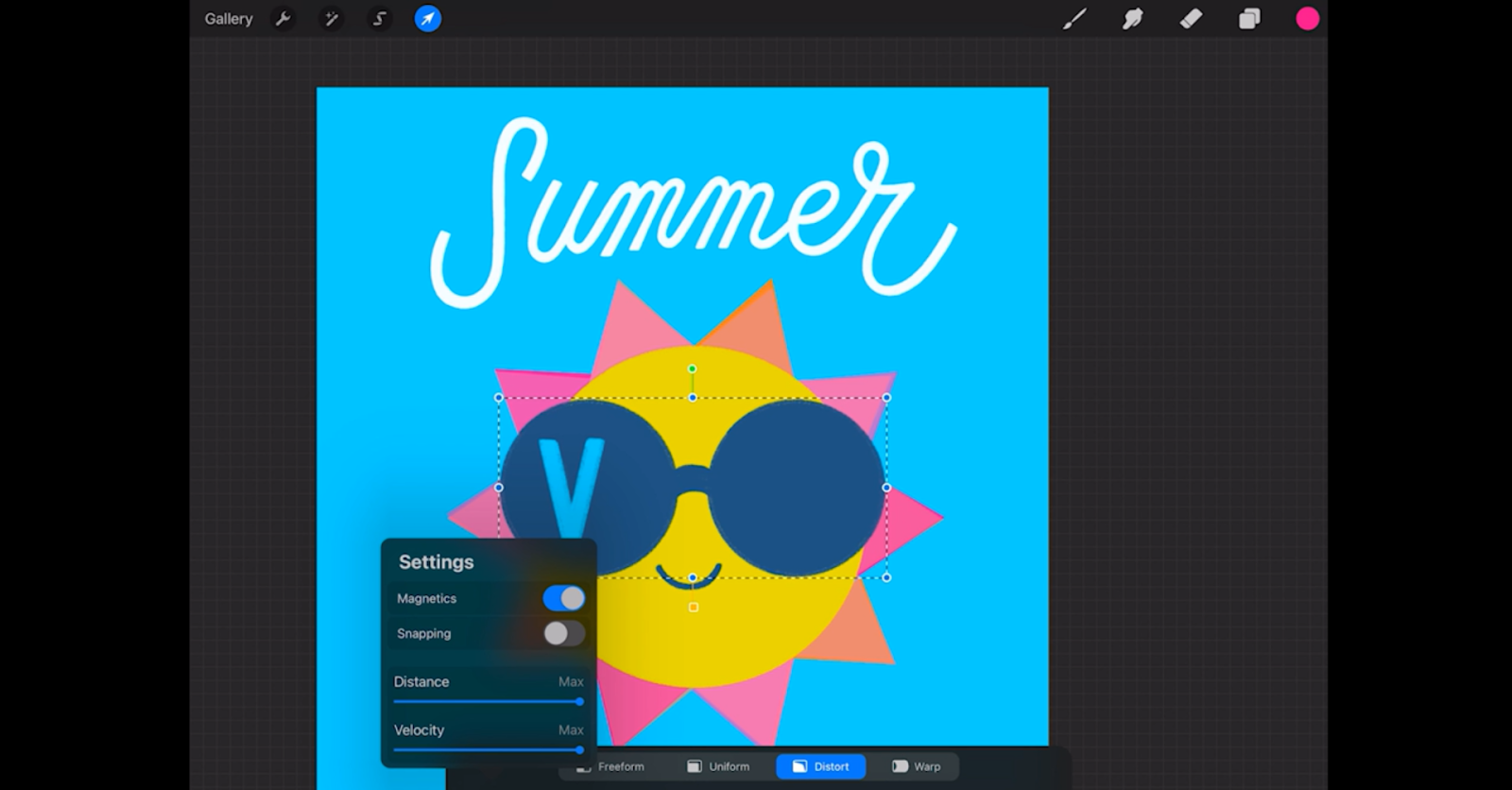 Pro Tip: Turn off the animation assist to get a clear picture of what you are moving.

In the third frame, grab sunglasses, V and I and go up a little bit more than before, so you can kind of see the sunglasses in the background.

Organization and doing one element at a time is the key. Don't try to do everything at once. If you are going to animate one element, which is lettering, then just do that first, set up your layer and then come back and think what else you can do?

Sunglasses went up a little bit in the second layer, and then in the third layer went up even more. On the fourth frame, grab all the letters and the sunglasses and then just go up again. 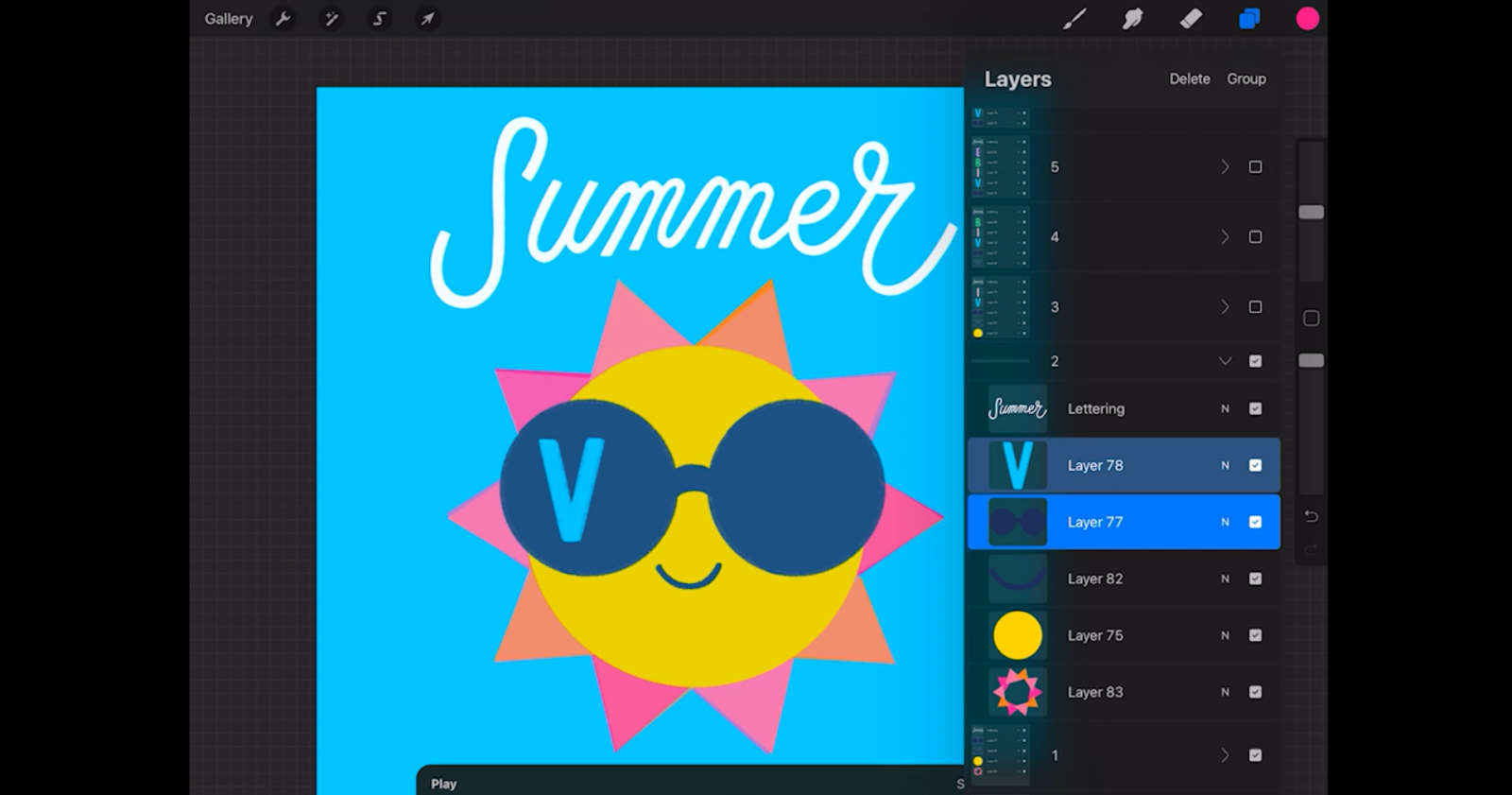 On the fifth layer, it's just going to come down cause it was already in the original place. Go to Animation Assist and see how this all falls in place. 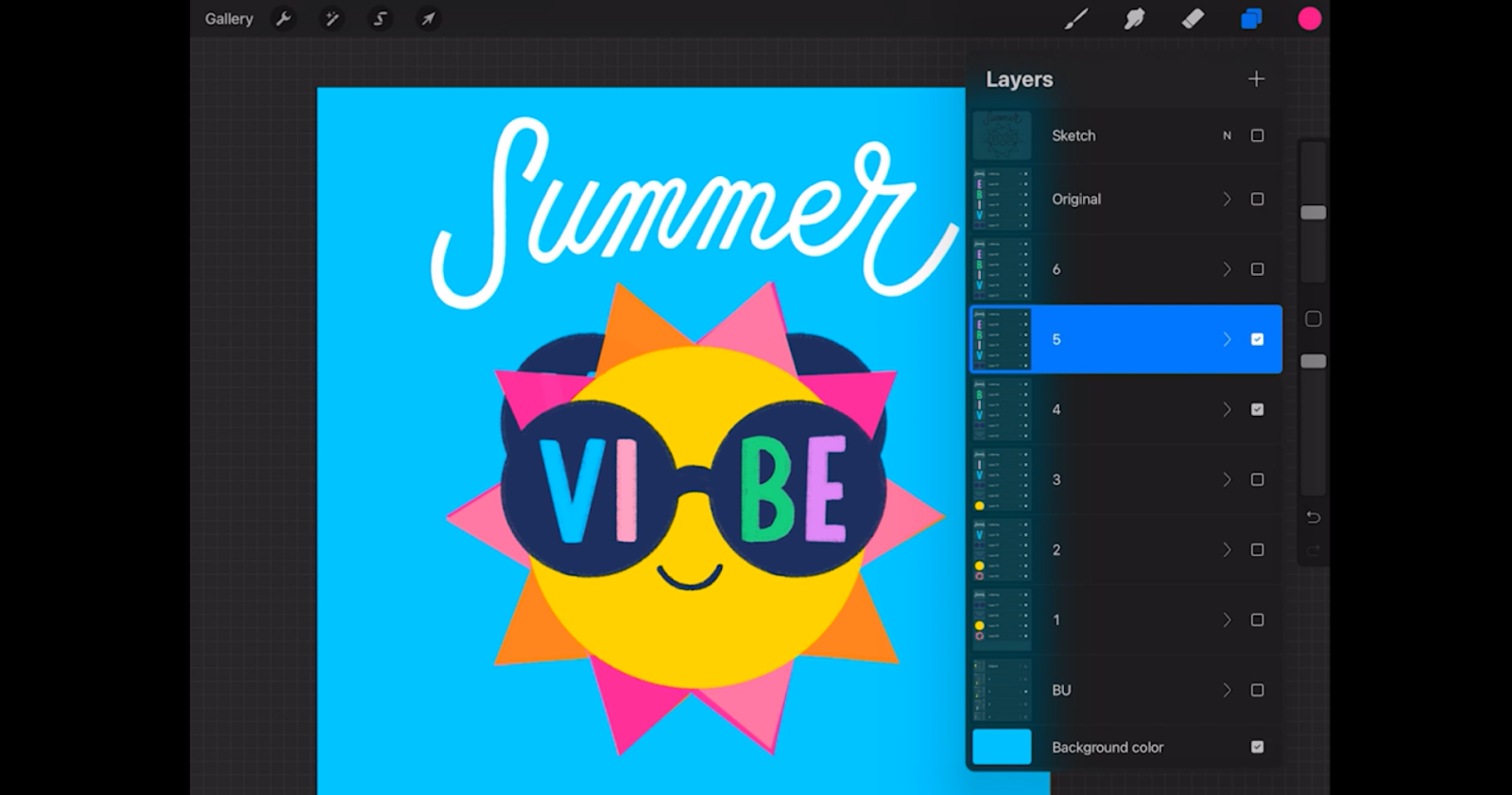 Add Eyes of the Sun

Select frame 4 and create a layer above the smile and add eyes. Use No Sweat and create white eyes. Color the eyes white and switch off the sunglasses layer. Add a new layer and create a clipping mask. 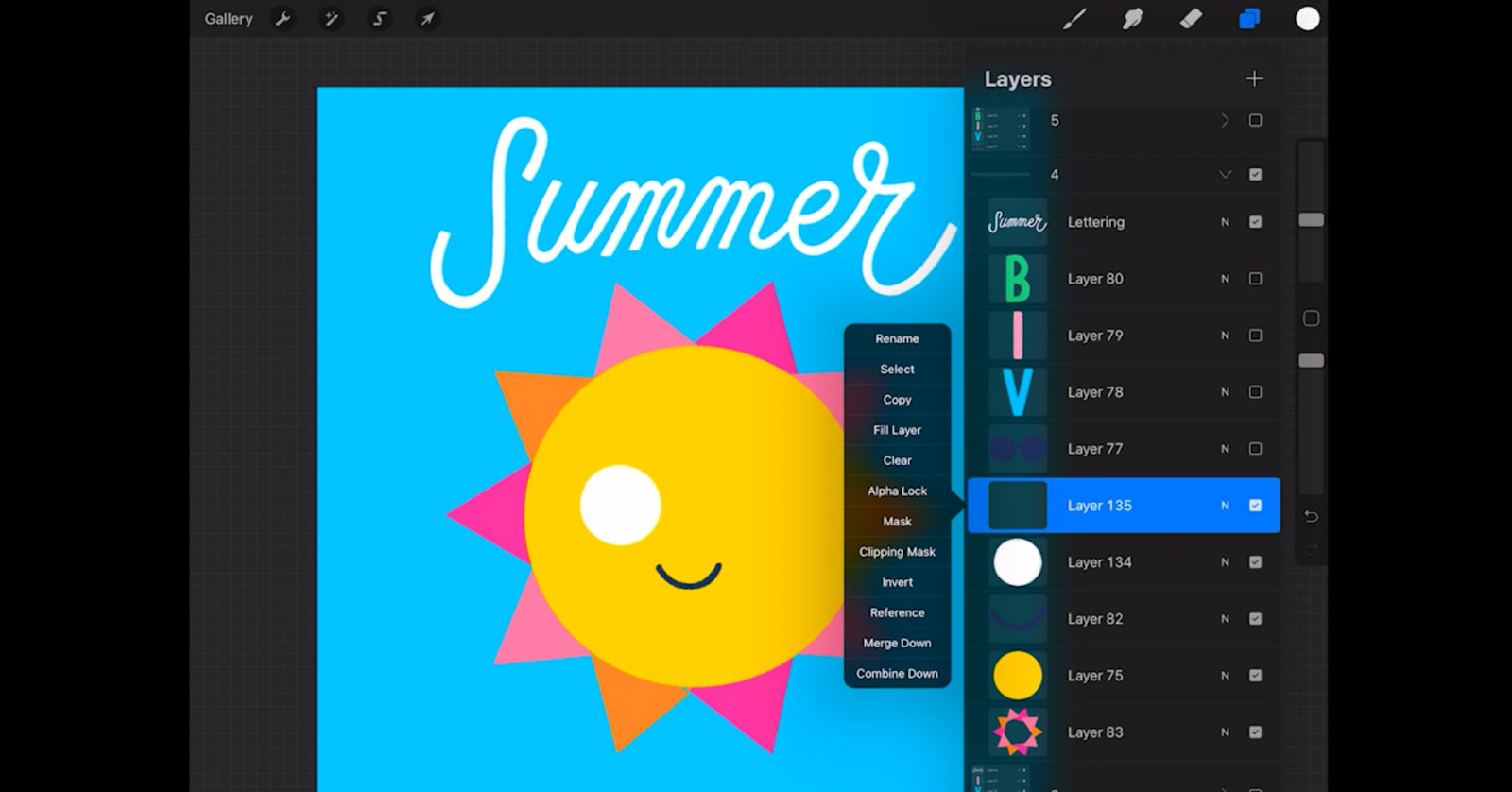 Whatever you draw on this layer, it's only going to show where the white is. That's the beauty of clipping masks.

Duplicate the eye and use Magnetics to place the eye right across the first eye. Turn off the sunglasses layer to see how it looks. Merge both the eyes into one layer. Duplicate the eye layer and drag it over to Frame 3 and arrange it. Test the animation again.

Pro tip: Whenever you drag the layer into another frame, it will automatically be shifted as the last layer, so always reorganize the new layer.

A bonus trick that the artist uses is adding textures. To add texture, switch off the Animation Assist. Go to frame 1 and create a clipping mask of the sun layer. Change the blending mode to multiply. If you're not familiar with that, there's something called N, as shown in the image below. 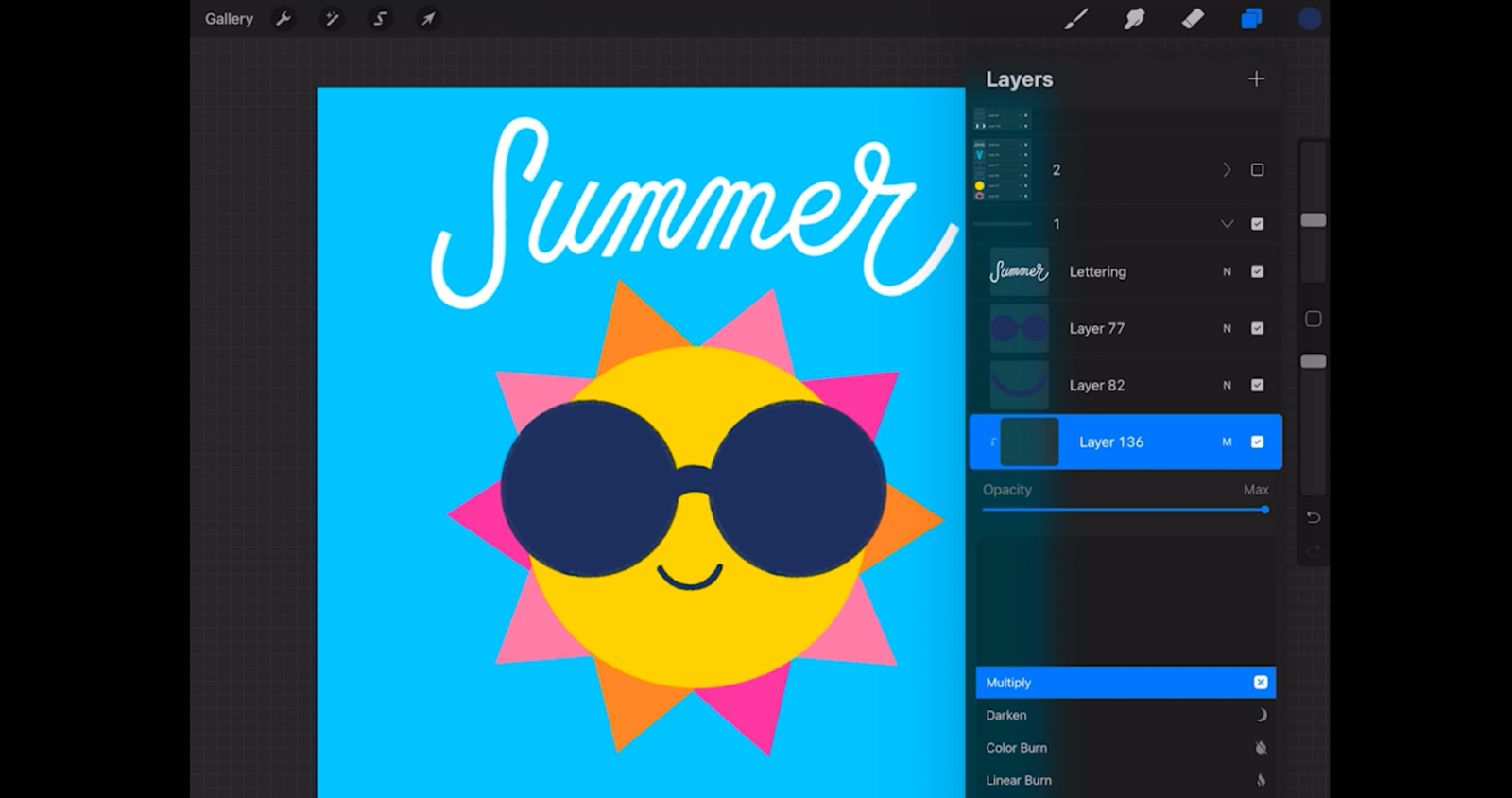 N means normal. If you click on it, the blending mode option shows up. Select the Multiply. As the name suggests, it multiplies whatever you use. It’s kind of like transparent paper. It shows through whatever color is underneath. Select brush from Texture Stamps - Roasted.

Switch off the sunglasses to get a clear picture and color the sun. Lower the opacity to 75%. Repeat the same process by creating a duplicate layer of the sun, use a clipping mask and then blending mode to multiply. Color the sun. 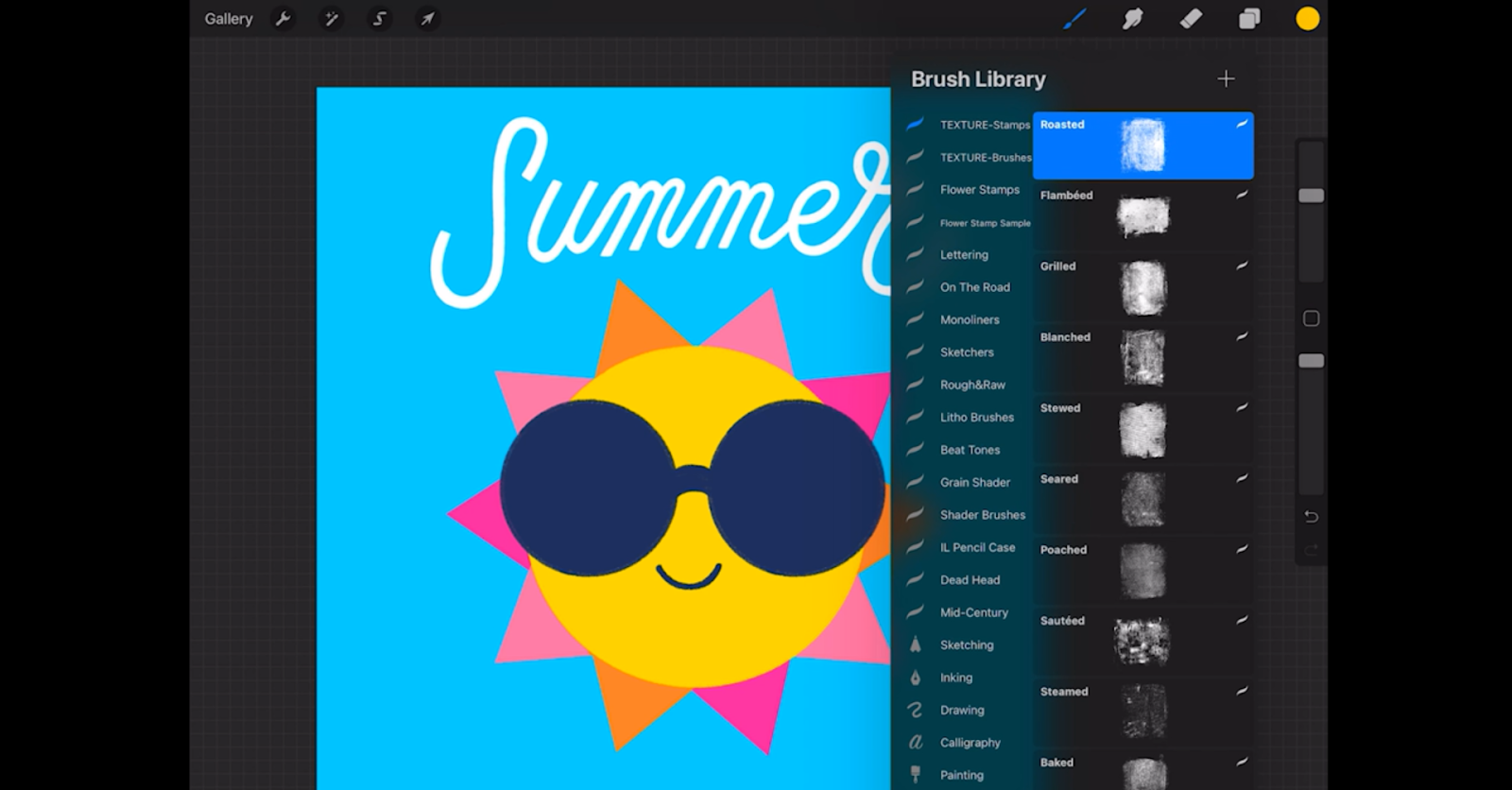 Turn on all the layers and click on Animation Assist.

In terms of timing, go to settings and change frames per second. If you go fast, it'll move faster. The number is high. If you want to go a little slow, you can always slow down another thing. Four is the sweet spot for artists. When looking at the GIF playing, review it again and see if any adjustments are needed. You can make the sunglasses stay up a little bit longer. 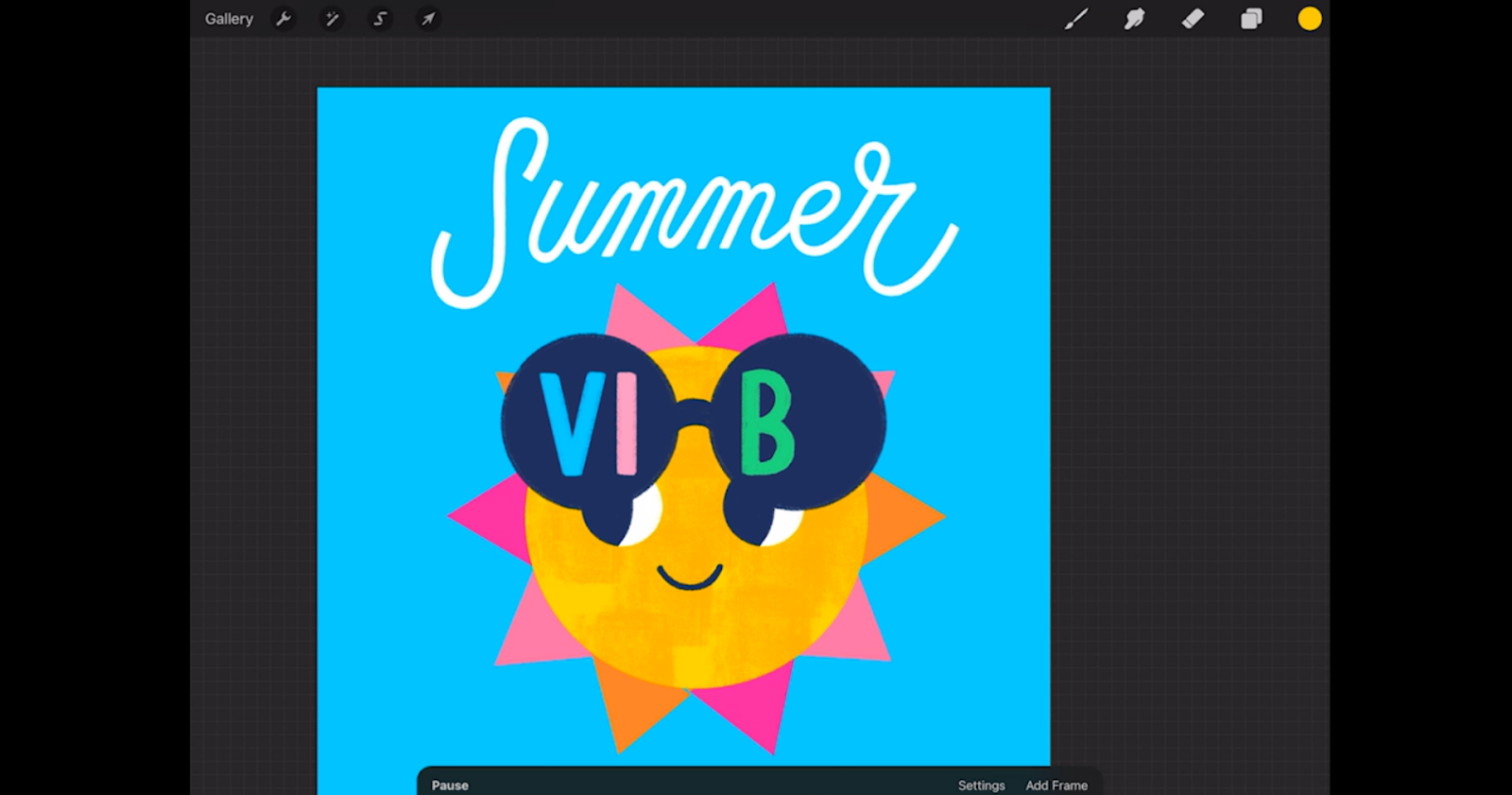 When you pause and click, you can see the blue bar on the very bottom and choose which frame you want to look at. All the frames look good except in the fourth frame, as sunglasses should stay a little longer. Click on hold duration. It holds a selected frame for one-on-ones. You don't have to duplicate your layer because that's how the old way has been before the appropriate updates. You can create the same layer again to show that same frame again, but you no longer have to do that. 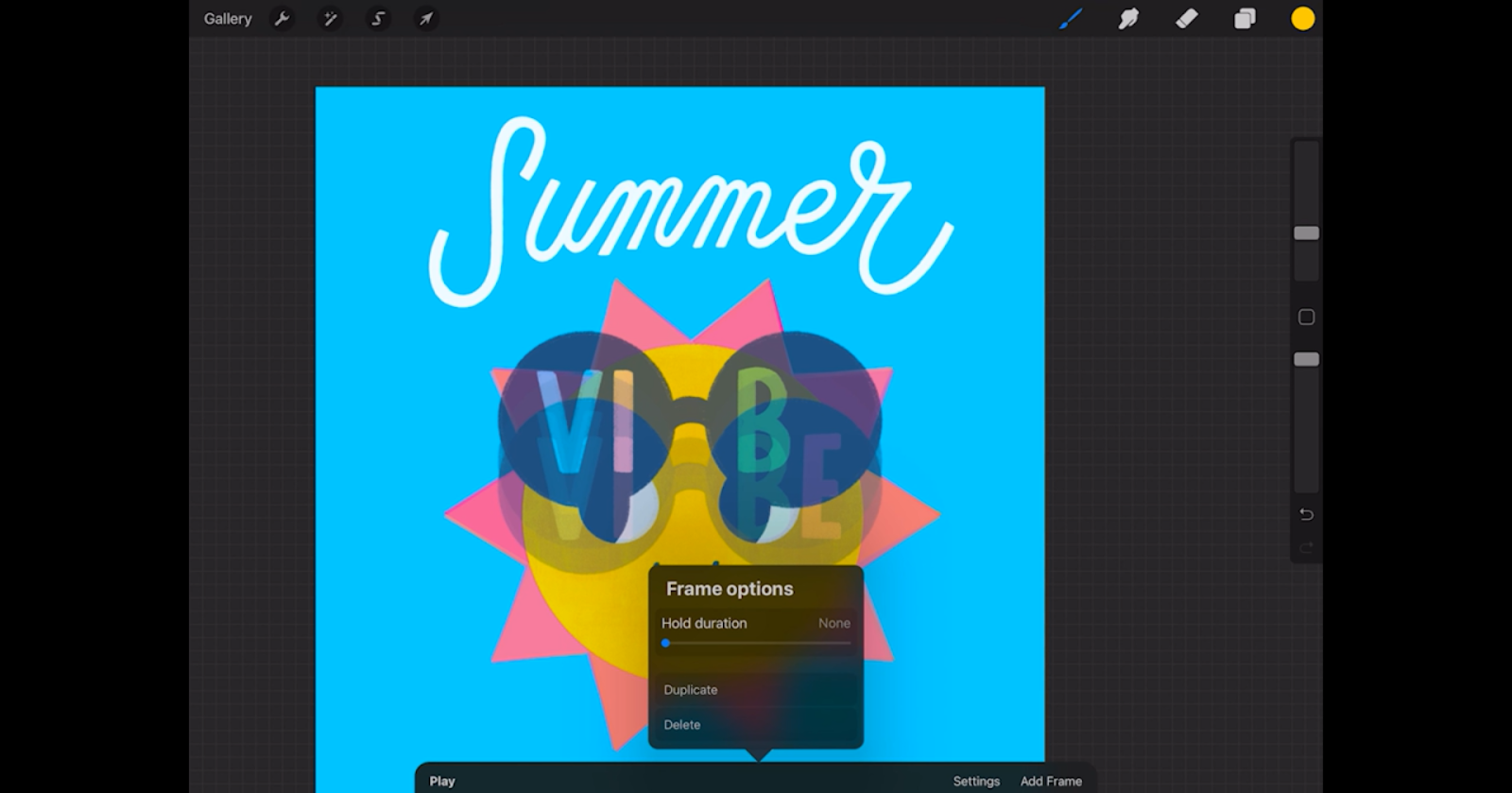 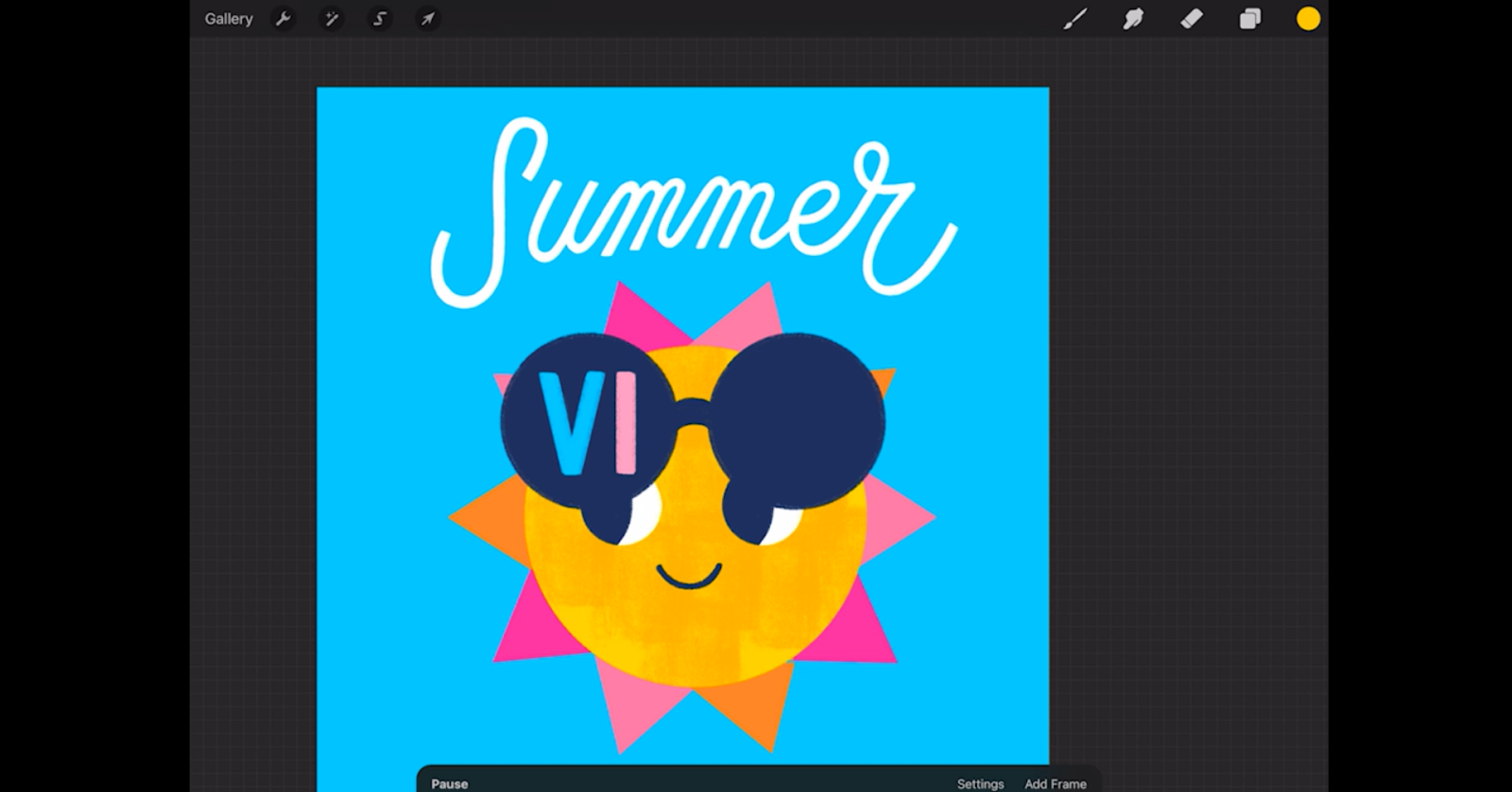 There are certain settings like a Loop, Ping Pong, One Shot. A Loop means it's just playing again and again from start to end, and it goes back to start to end. That's what a loop is. One Shot, just play one time. Ping Pong starts, goes to the end, and starts from the end again and comes back. The letters disappear backwards. So what it does is that it starts, it plays all six frames, and then it'll play backwards. it'll be 1, 2, 3, 4, 5, 6, and then it'll play 5, 4, 3, 2, 1. The artist herself uses a Loop. 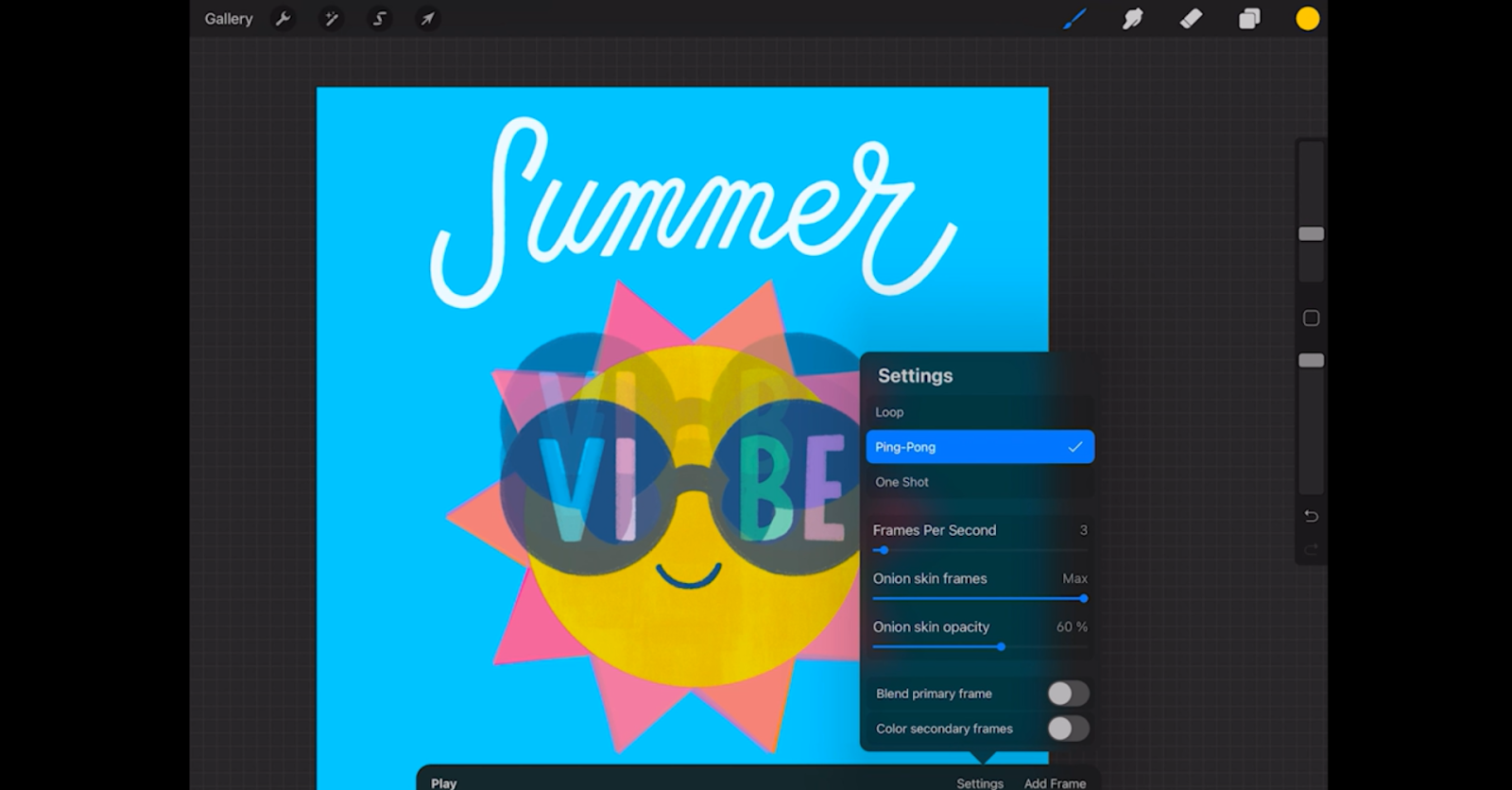 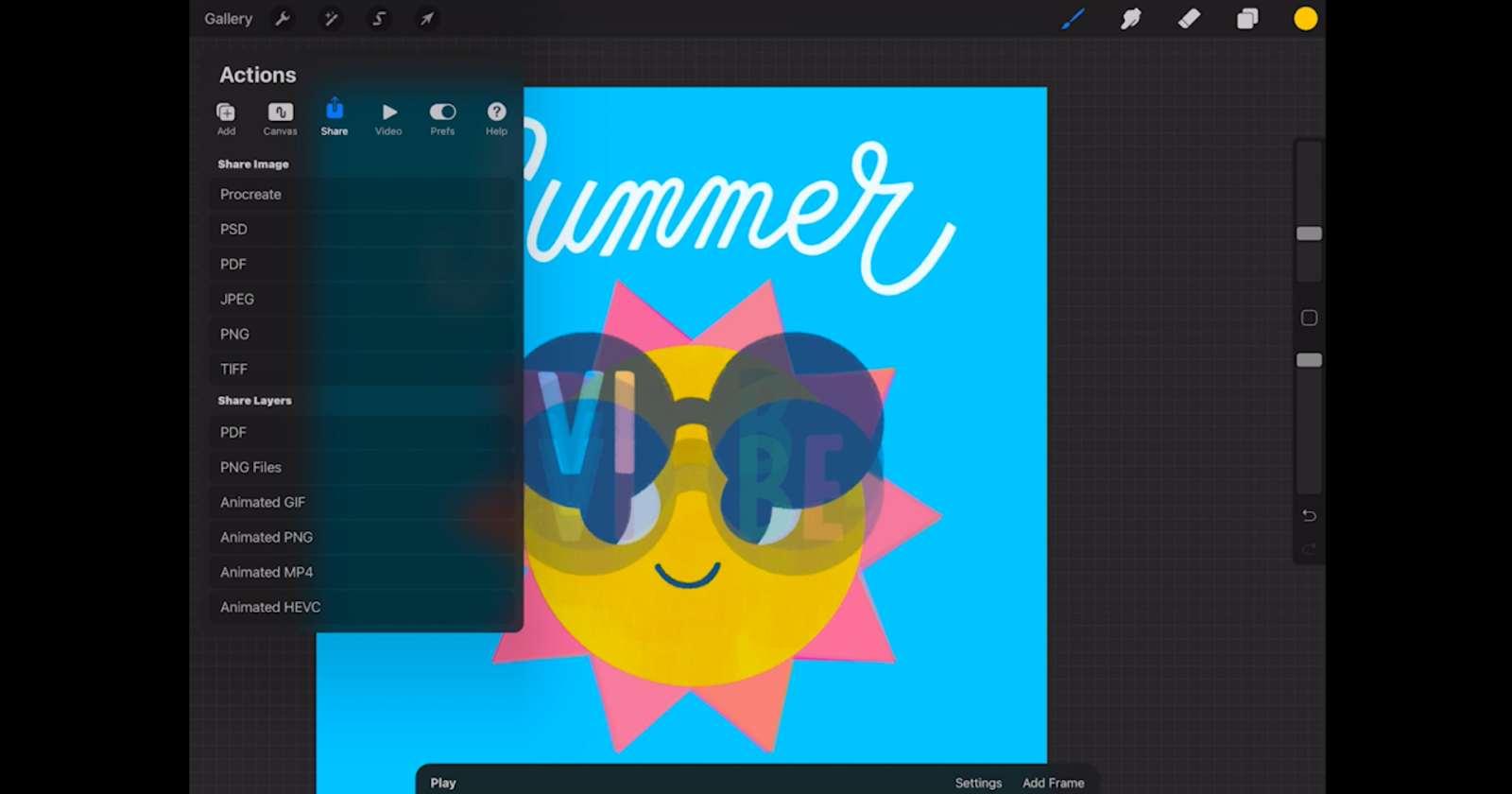 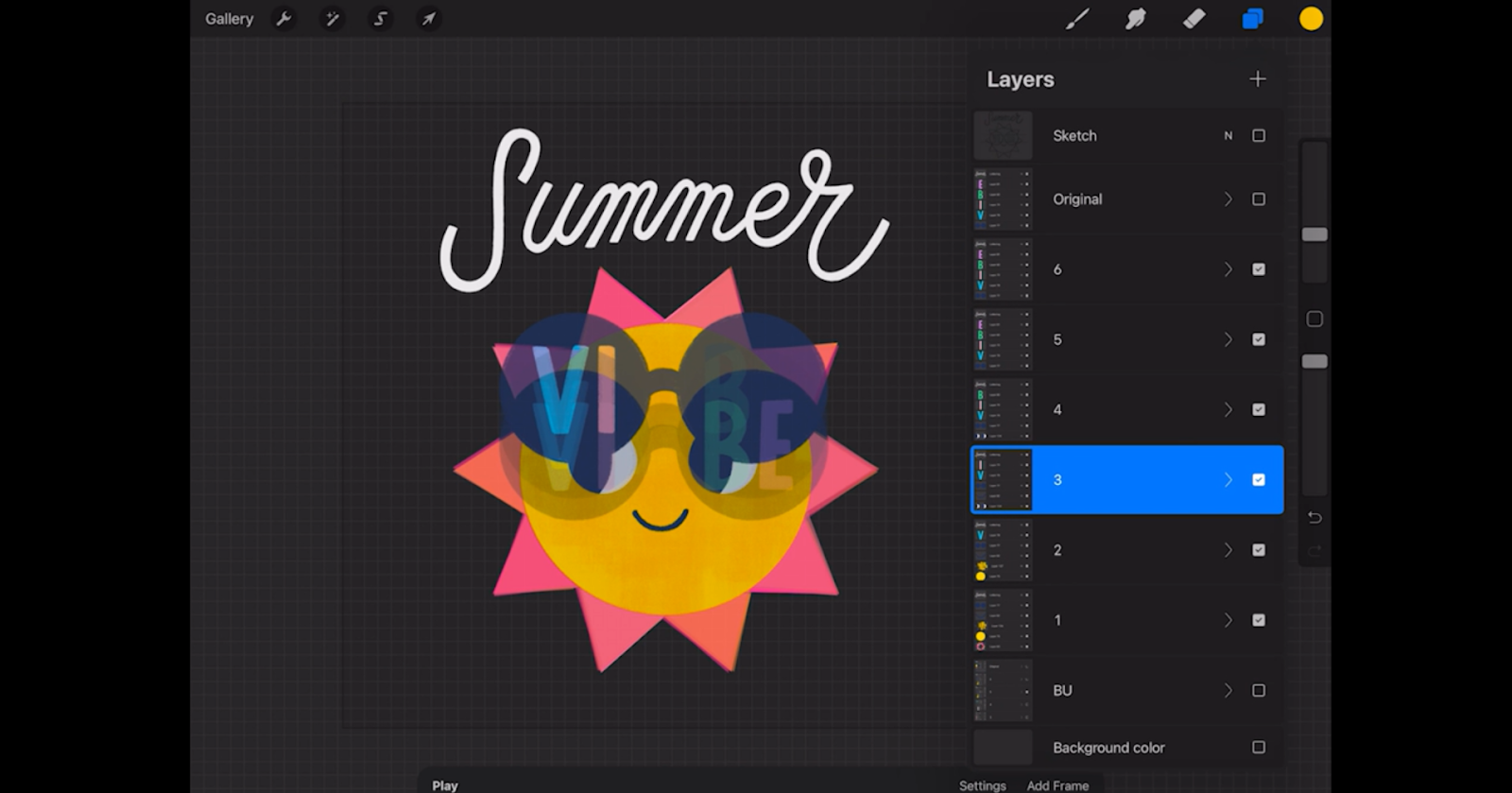 Congratulations, you have created an animated GIF and also learned how to export it to Instagram as a story and a regular post. , 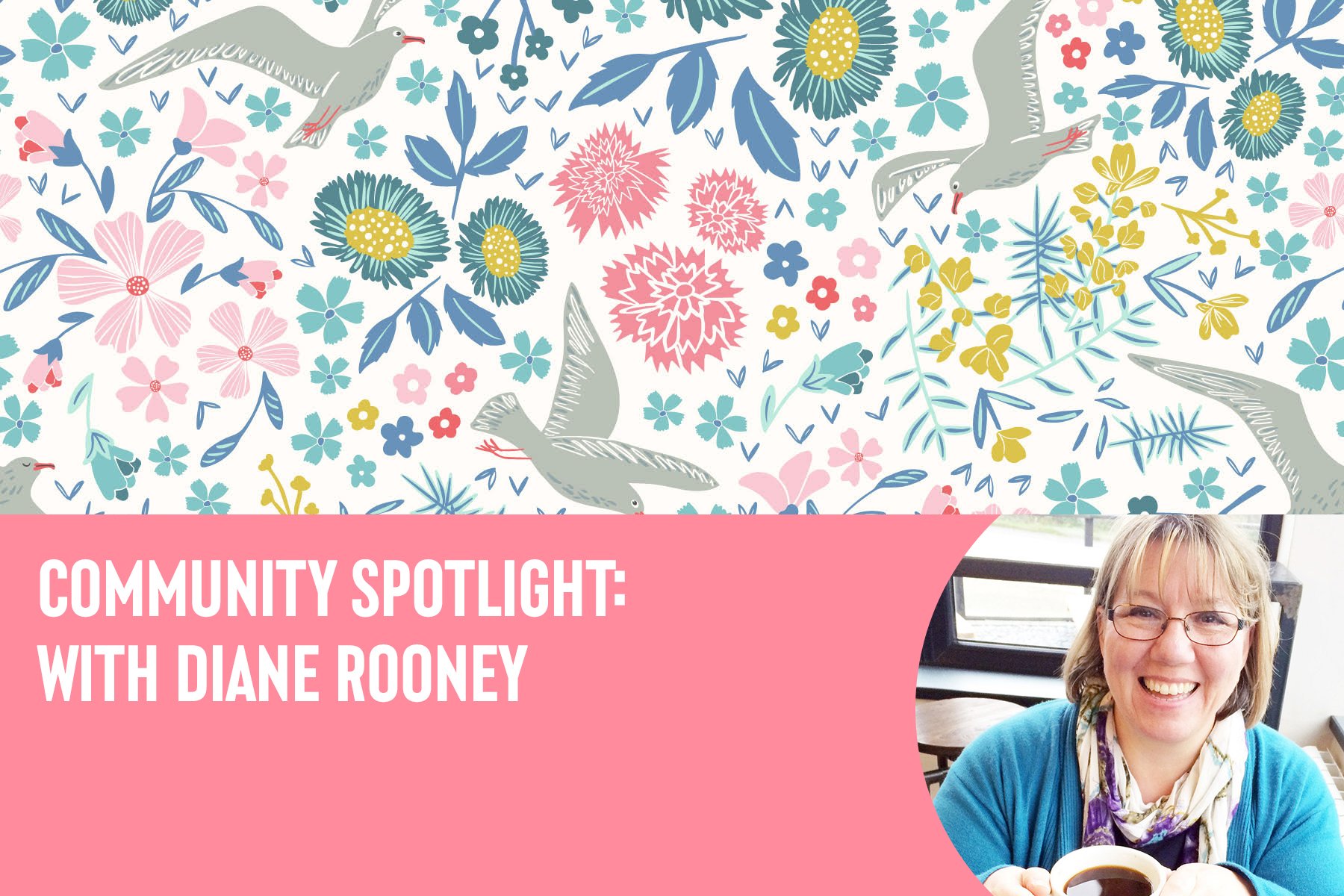 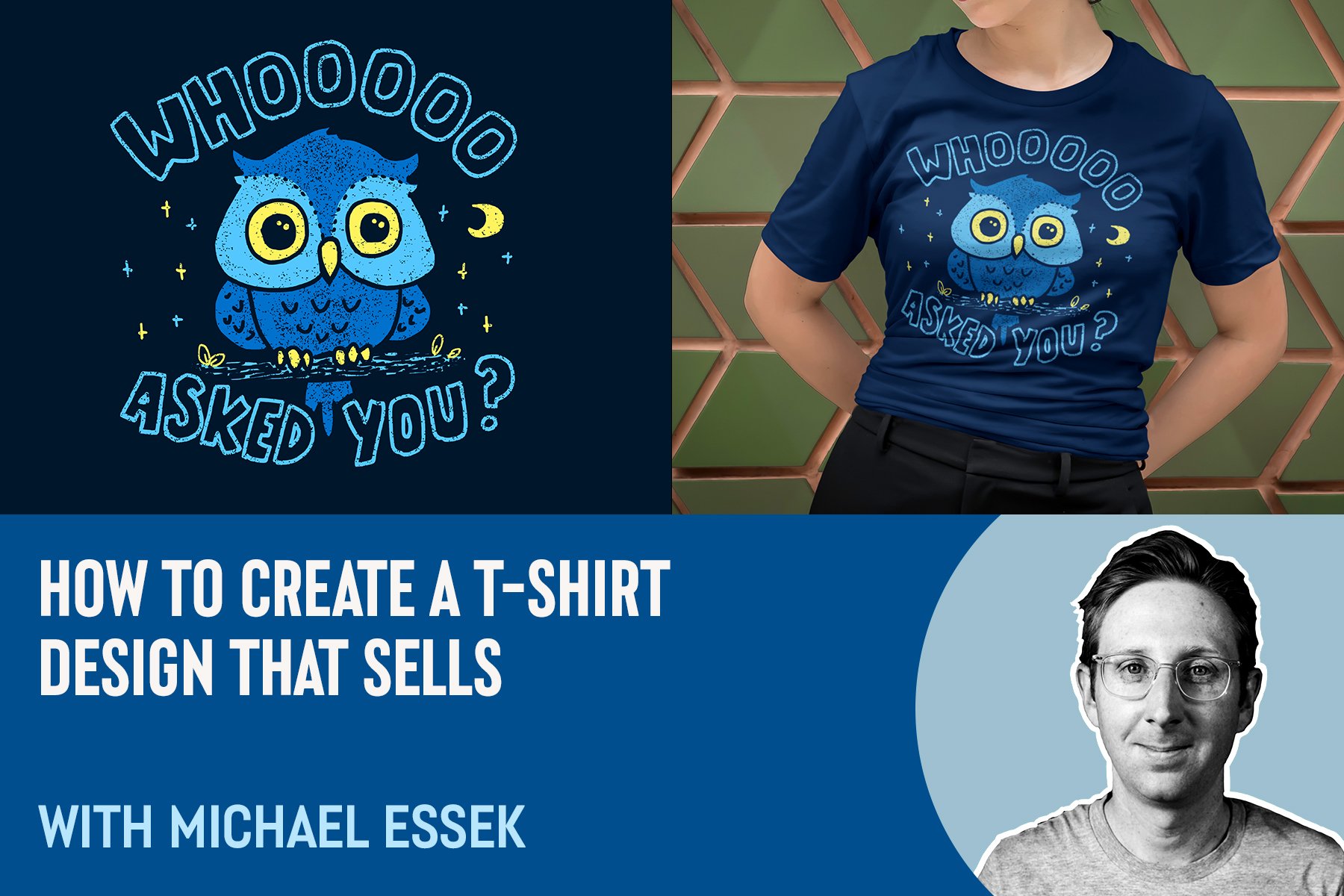 How to Create a Sellable T-shirt Design with Michael Essek