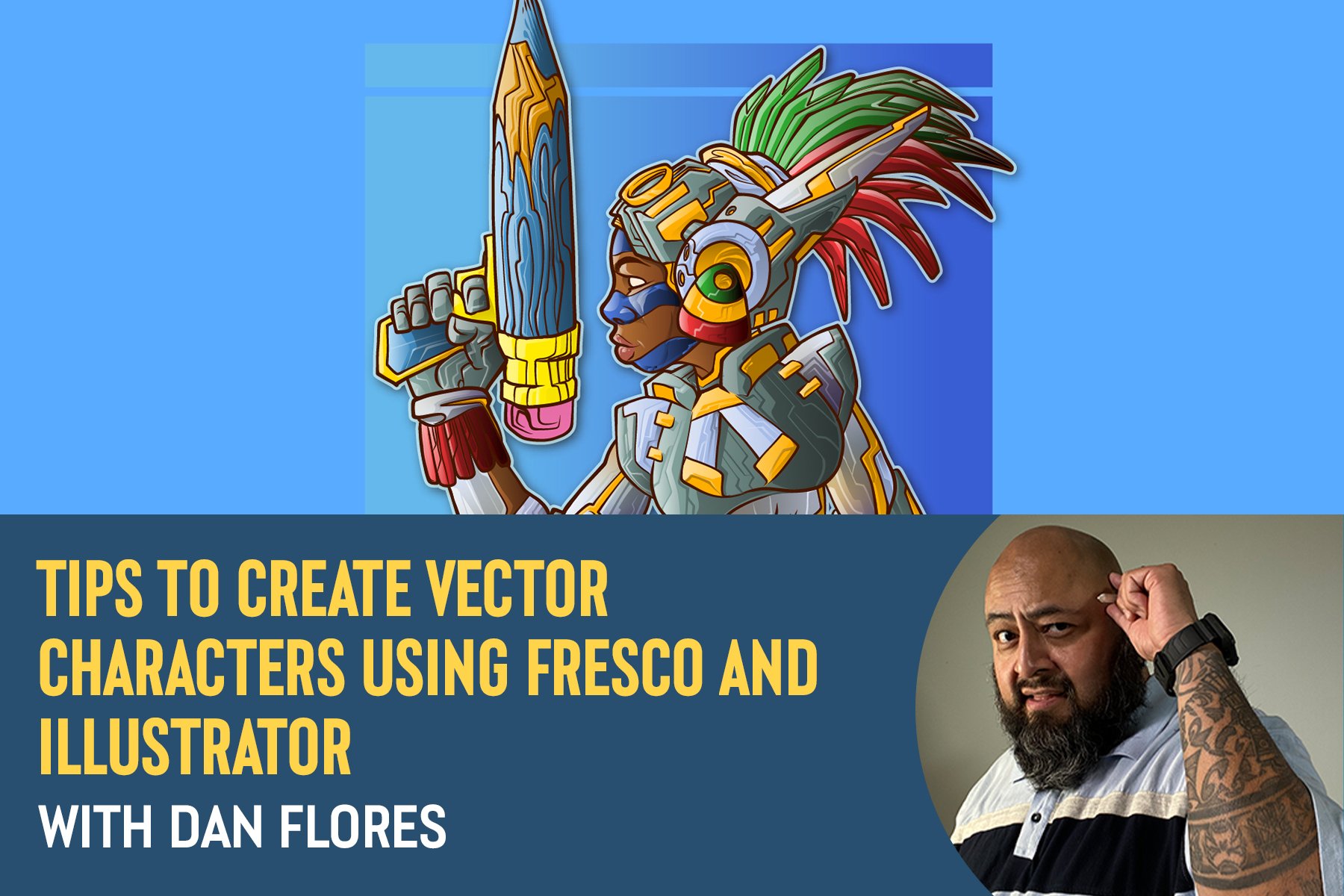 For the first time here at Design Cuts, we were thrilled to welcome Dan Flores to our weekly live sessions! Dan is a multidisciplinary artist with over 20 years' experience in traditional and digital art. He is the founder of DaCreativeGenius and leads a team of eclectic artists to help brands craft engaging visual experiences to tell a story in a variety of styles & media.

In this session, Dan provided his tips and tricks to help us create vector characters in Fresco and Illustrator. This was a really fun and useful session with plenty of takeaways to help us move our character design to the next level. 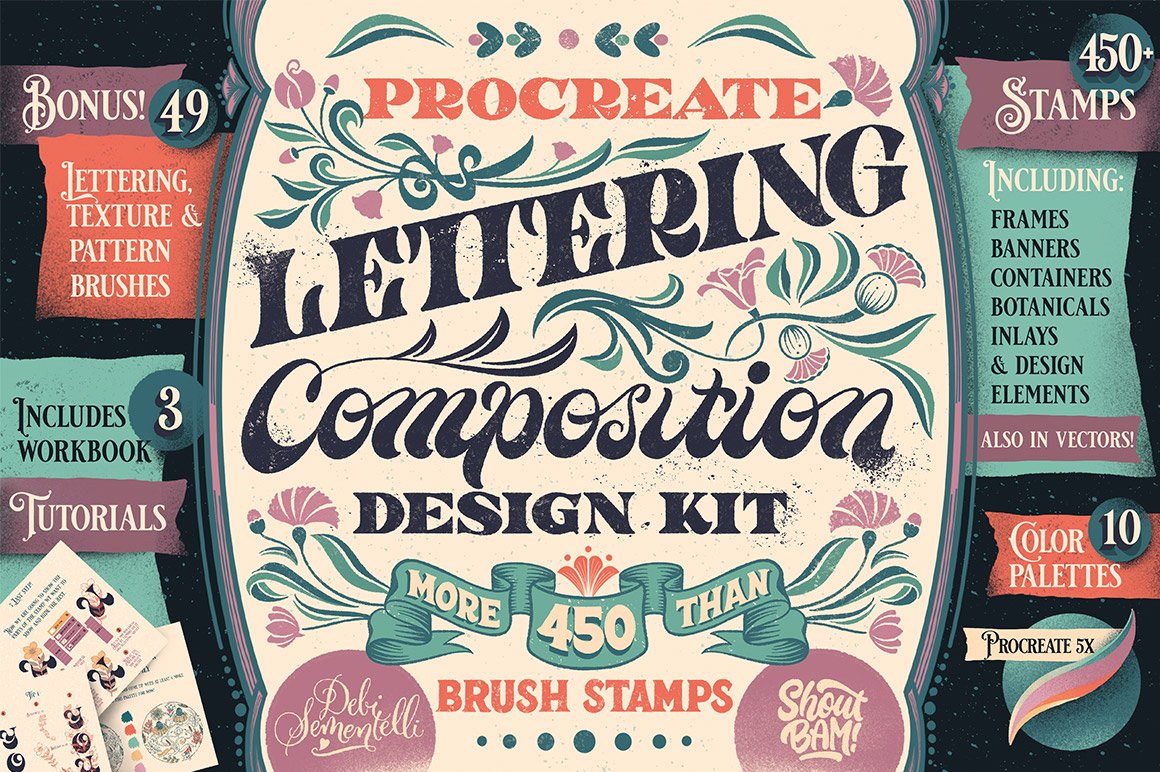 Draw a sketch of a character in Fresco. In this session, Dan drew the Aztec goddess who gave birth to the moon, stars, and Aztec mythology inspired by the mythology of Mexican culture. This character is about women's empowerment depicting strength.

This sketch was initially done on Sketchable and then Fresco. See the image below for reference.

Pro tip: Fresco has vector brushes. On the left-hand side, there are three different types of brushes, namely Pixel Brush, Live Brush, and Vector Brush. If you have a Creative Cloud account with Adobe, then you can have access to Kyle T. Webster Brushes. 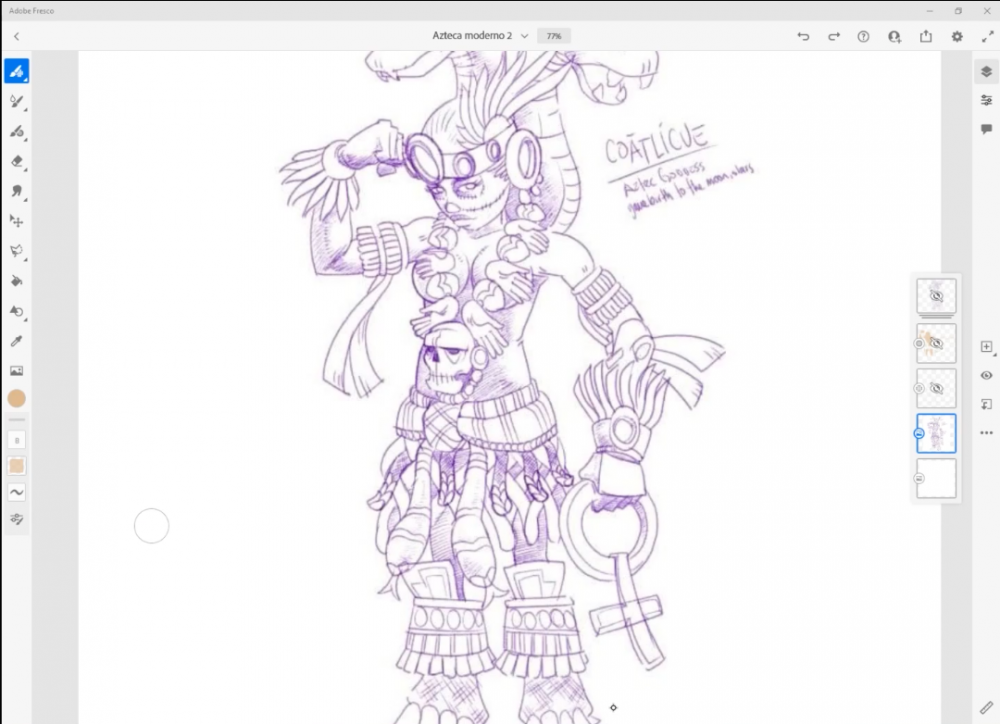 The basic Round Brush is round in shape. It responds to pressure and has a round start and finish cap. When you draw on paper, notice the thin and thick lines based on how hard you press on the paper. The brushes also respond to speed. 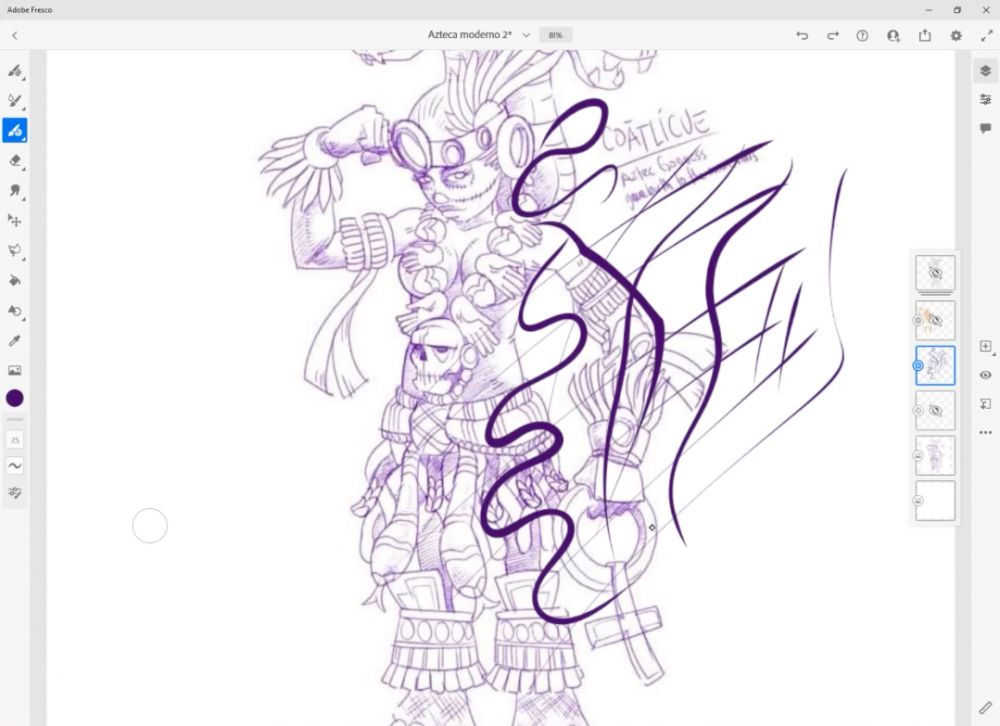 When it comes to character art, start with shapes. Draw the skeleton and add joints. You could also choose the stick figure technique or the shapes technique and draw the shapes for the sketch. 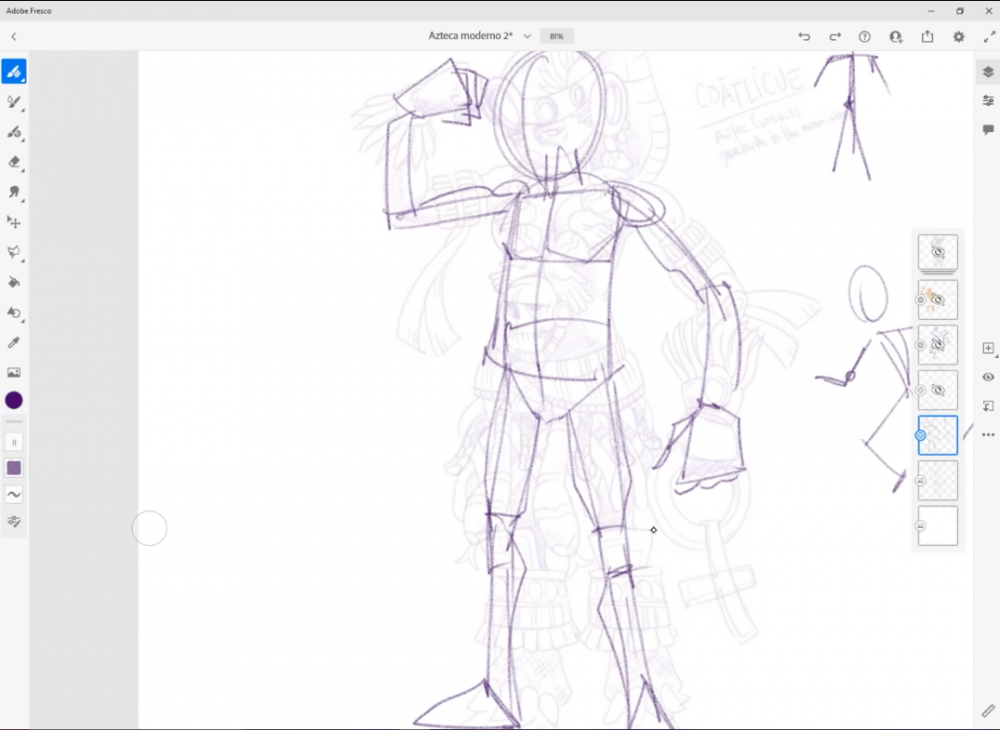 Play around between realistic and stylized body styles and proportions. While drawing a character, start using this technique and take your time to get to the point where you can draw realistic and in full proportion. Understand proportion and the body features such as the waist, knees, thighs, and hands.

Create another layer and turn off the layer from before. Select the current layer and draw again, adding more realistic features. Draw the face and ears. Create the neck and shoulders and work your way through the different parts of the figure. Later, add other elements that the figure would eventually hold such as a belt or pouches.

Pro tip: The process of the initial bone structure to shapes and details can go between 3 to 10 layers. 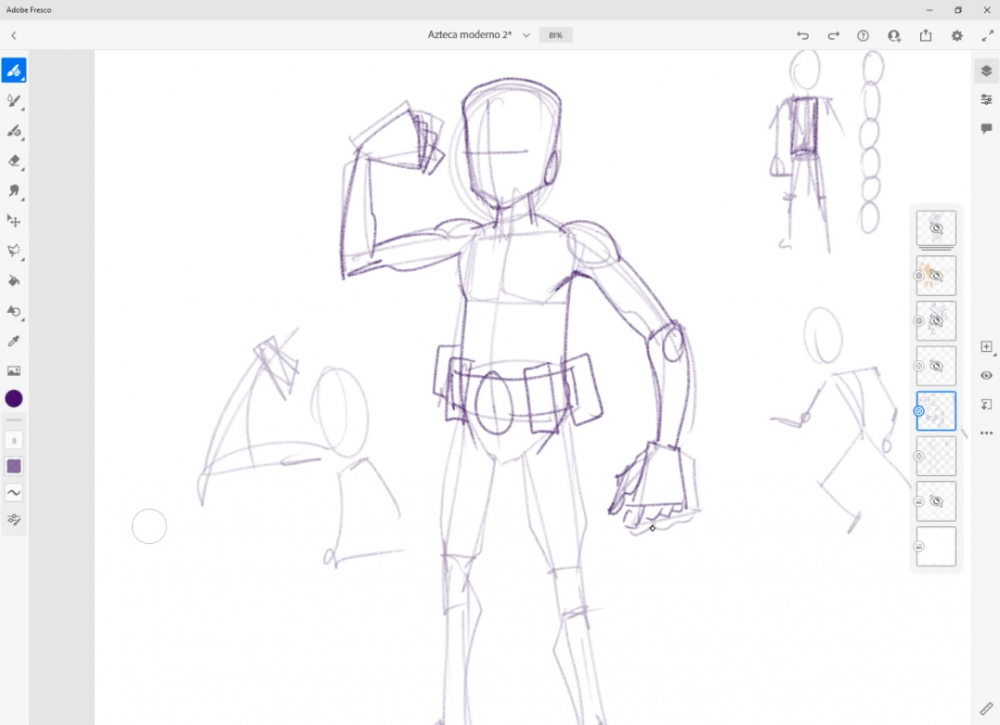 Pro tip: Always work with reference images to support your sketch, as it makes it easier to draw the foundation. 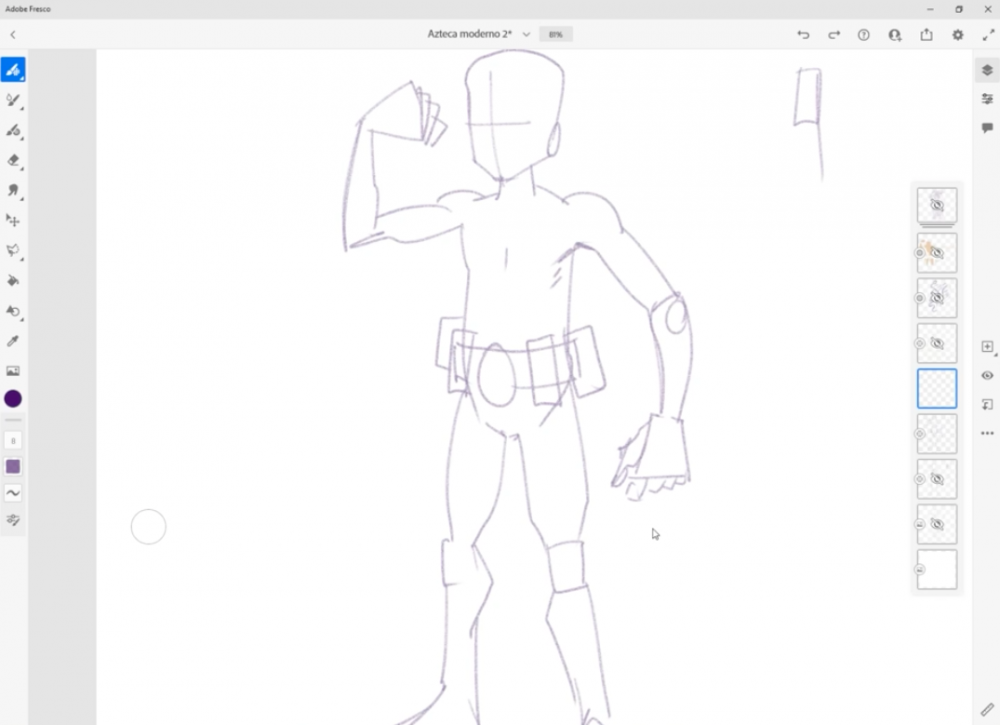 Add a new layer and draw the elements on the figure, such as armor and a shield. Draw as many elements with details to enhance the composition. 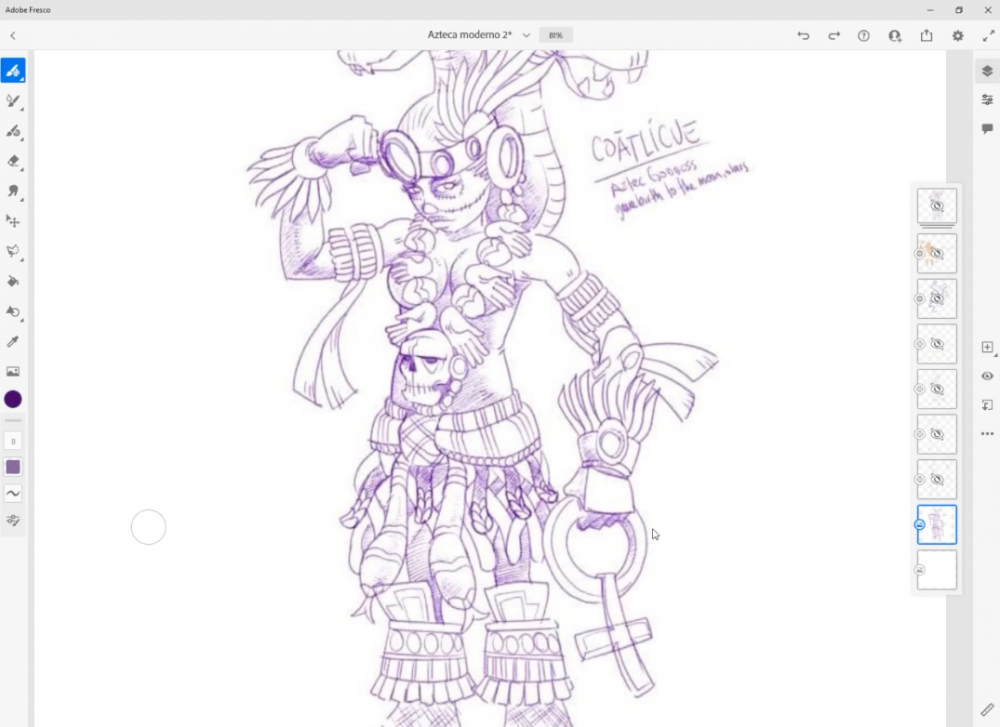 Fresco has Vector Brushes, which means that once you're done with the vector drawing in Fresco, you can export it into Illustrator and have all the anchor points and shapes. It can then be resized and the vector will still be crisp and clear. The Vector Brushes give the drawing an organic look. It adds a bit of imperfection to the drawing, making it look realistic.

Group the layers and turn the shapes off. This will form several layers for this one drawing. Several layers are used so that the face details are in one layer, the head details in another, the feathers on a different one, and so on. Make an adjustment to the brush from the pop-up window on the bottom left.

Select the brush and color. On the Color Wheel, move your mouse or pin to wherever you want the color to be. Use the slider for the size of the brush. 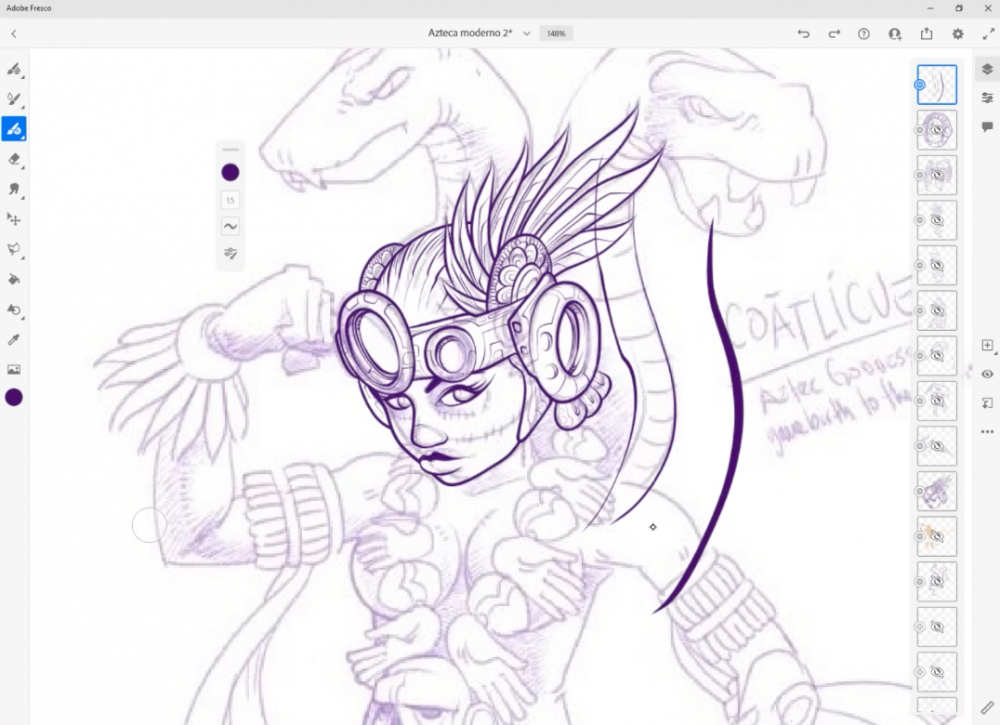 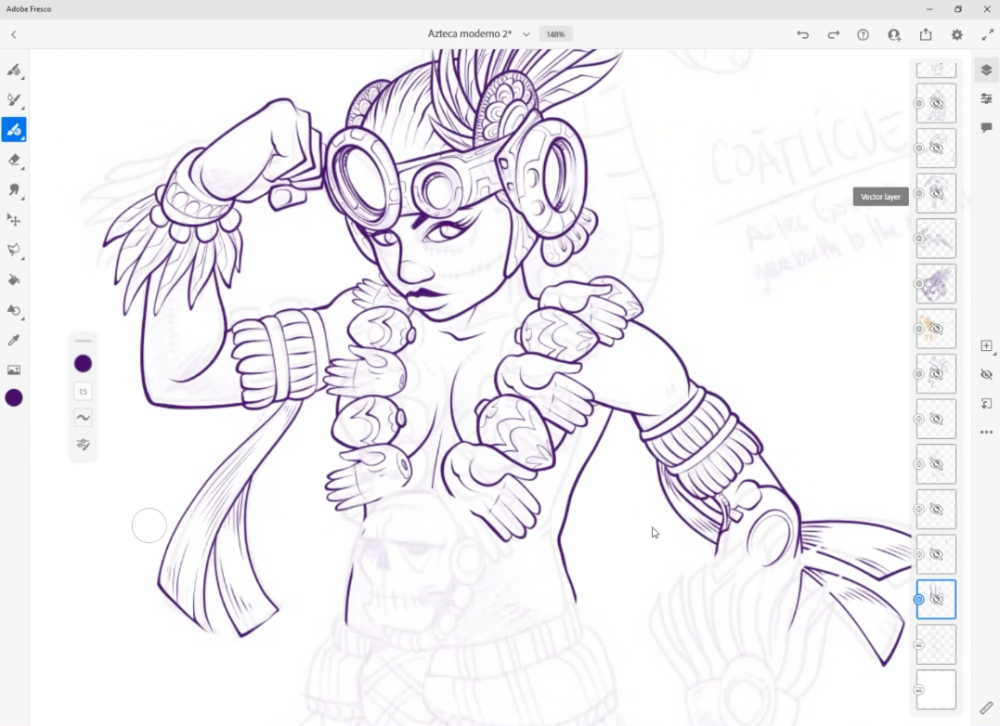 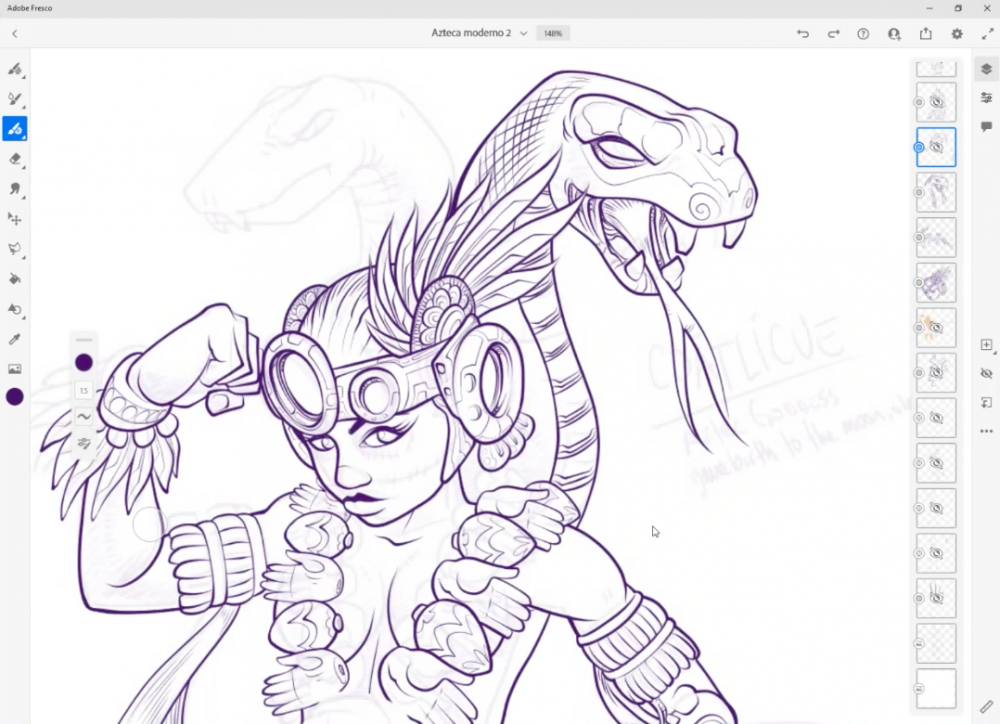 On another layer, sketch the legs. Work on individual parts so that it does not affect the linework. Add the skirt and the details. Slowly build on the drawing by adding numerous details in separate layers. 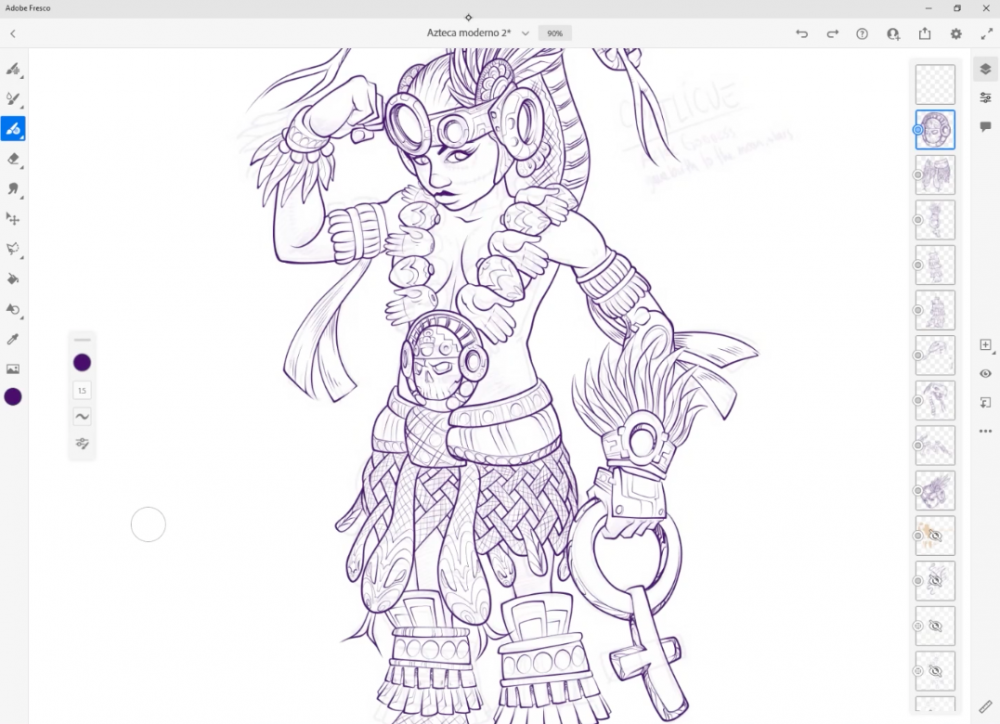 Pro tip: You can save and export this file to Photoshop by saving it as a JPEG, PNG or PDF. On the iPad, you can send this file to Illustrator as well.

Color the File in Illustrator

Open the vector drawing file in Illustrator. Lock all those layers and add a new layer. Use the Pen Tool and color the sketch. Use different layers for coloring so that you can change the colors later as well. 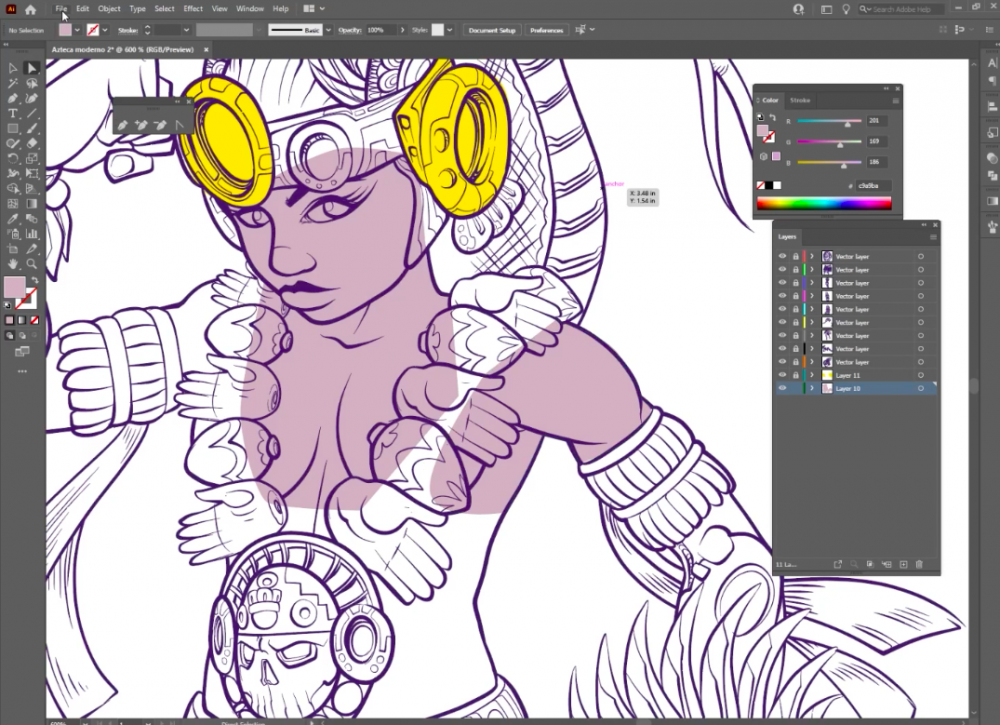 Add solid colors such as reds, blues, and greens. 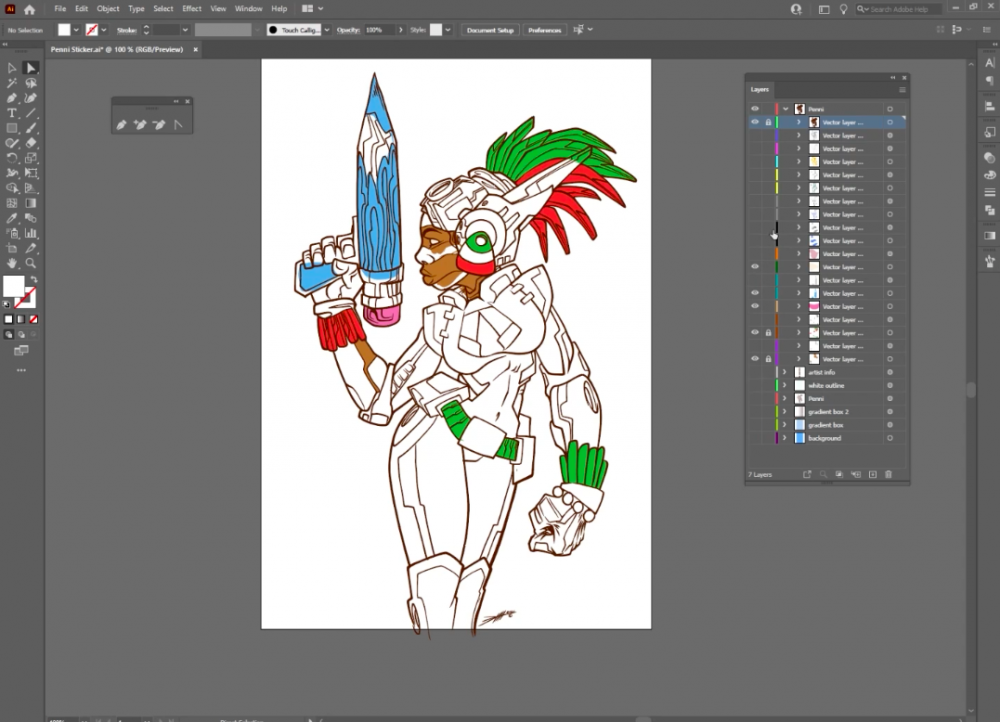 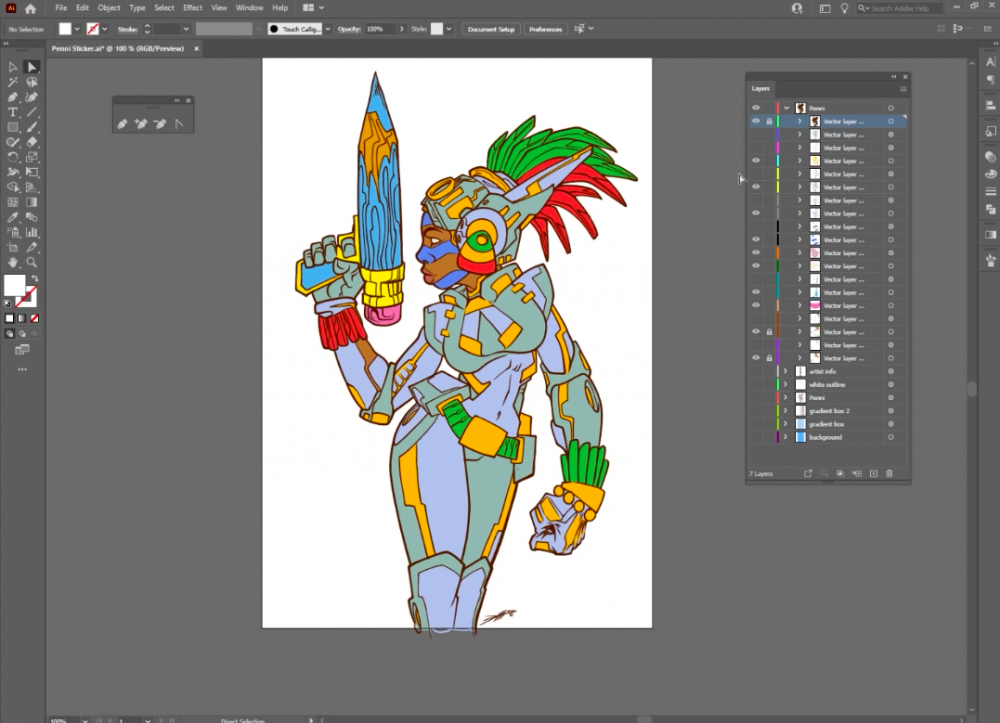 Shading is nothing but a gradient of the same layer. Make a copy of that same layer and on that new layer, check the gradients. Adjust the transparency. Use the Blend Mode to Multiply. Then lock all the layers. 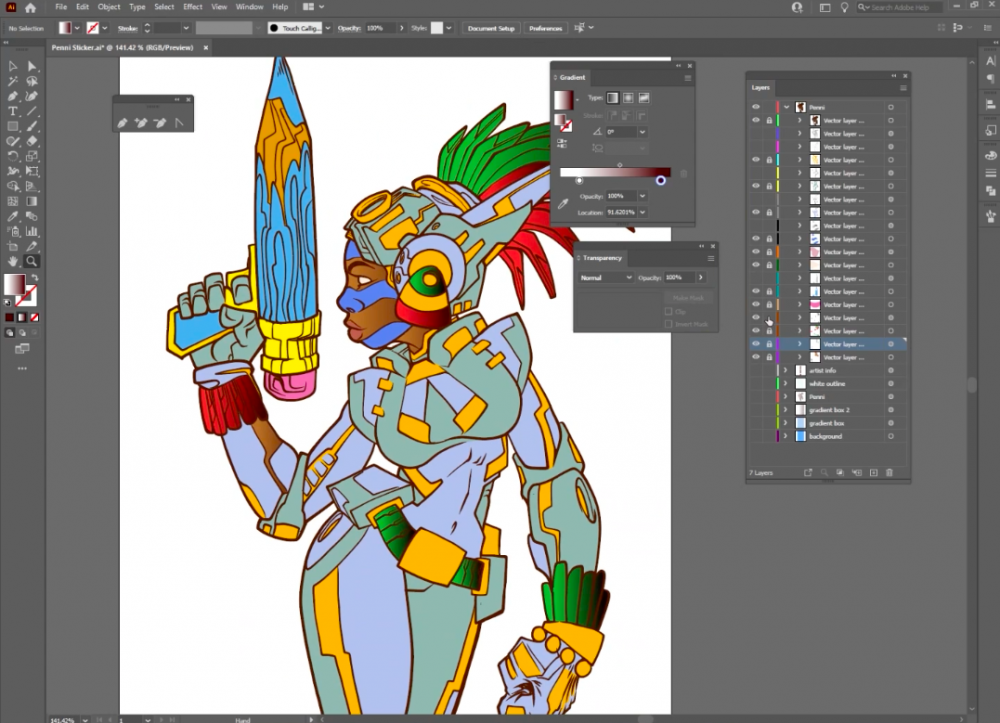 Use a Free-Form Gradient and Linear Gradients. Creating a grid inside a shape, add different colors. Play with tones and add a light source. 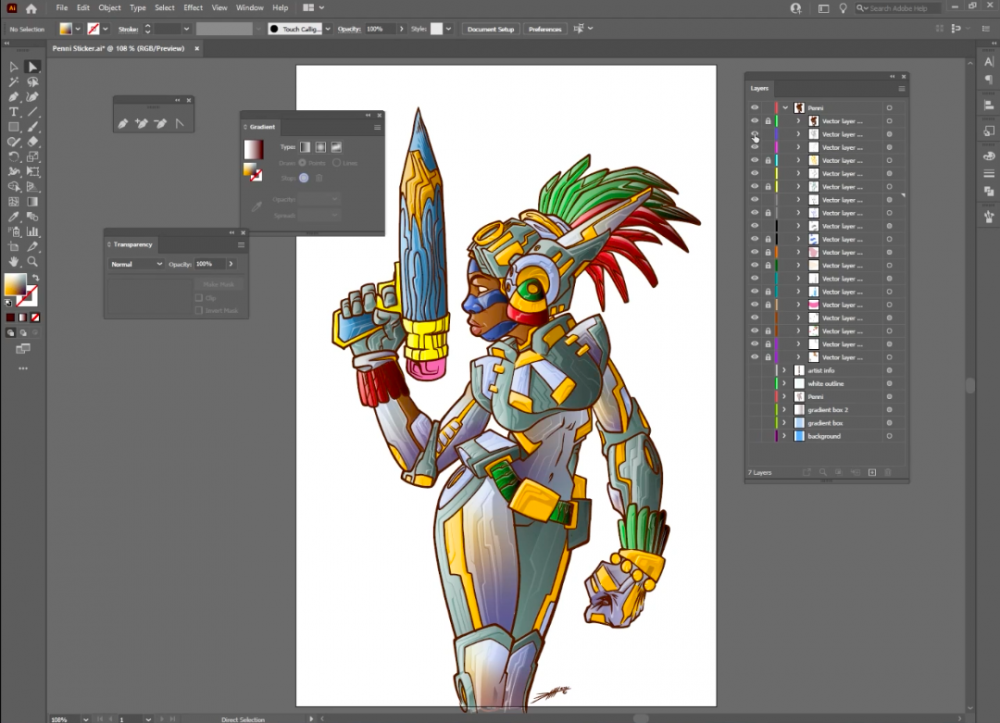 Add extra volume and details. Add shadows and highlights to give a sharp texture to the image. Put the screen transparency to 100. The highlights are a color that has a gradient. Use the Blob Brush and draw on the screen with shapes. Put the pressure at 4. 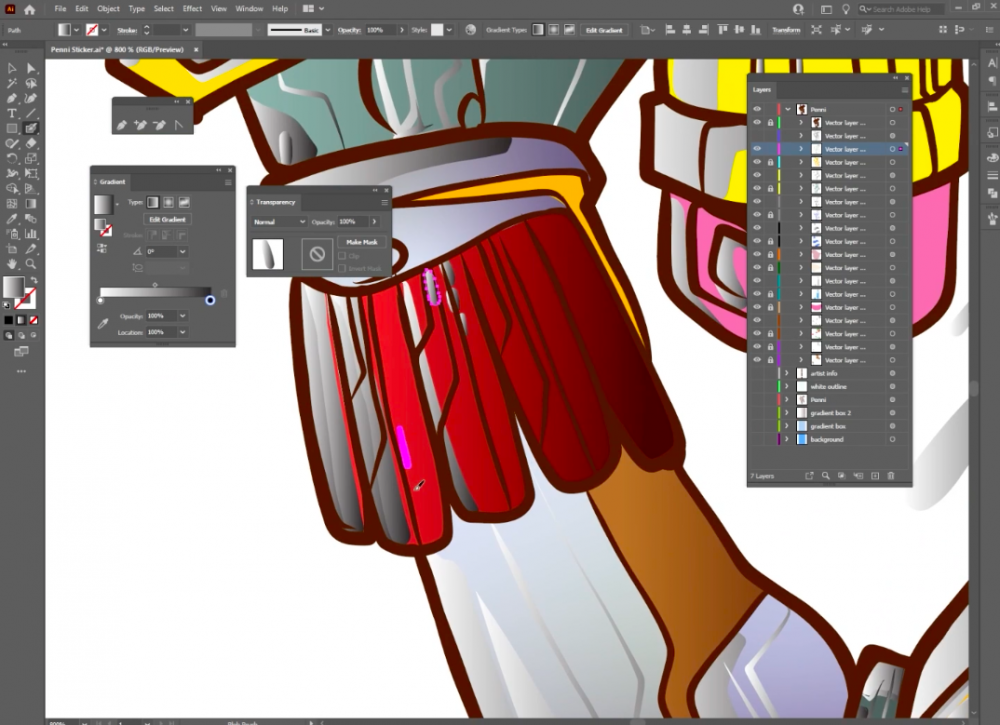 Use the white highlights to add a cool hue behind the color. Put the gradient opacity to 45% for a smooth texture. Create a shadow layer and change the color to black. Select the layer and multiply.

Add blue color to the background and then add a gradient. Add another gradient on the first gradient. Finally, add a white and black shadow, giving it a different dimension. 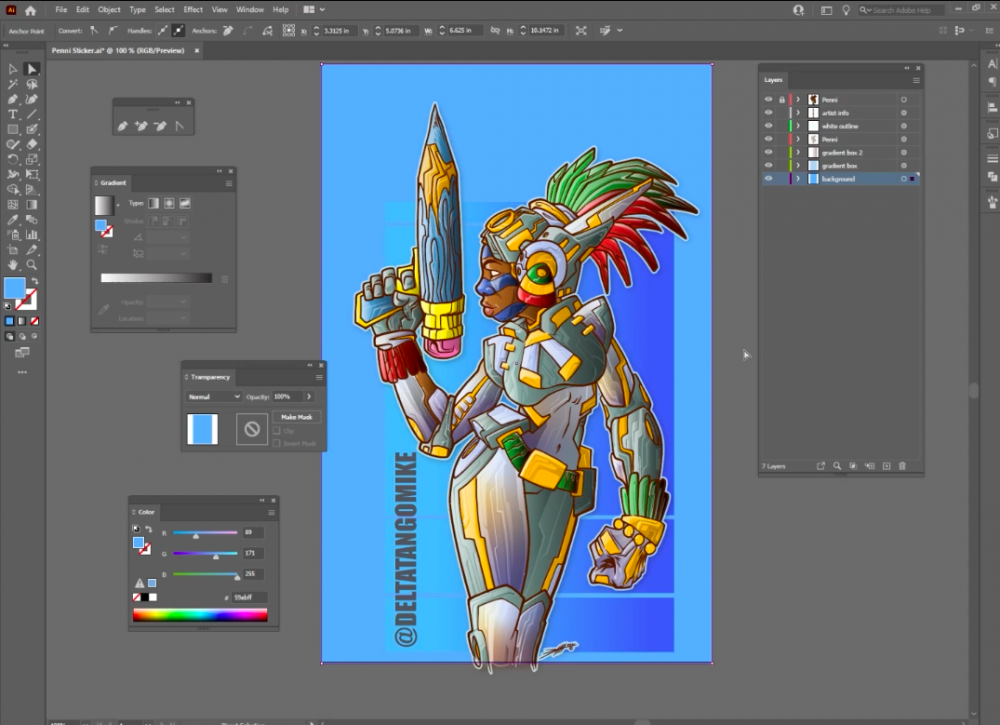 Congratulations, you have successfully created a beautiful vector character using Fresco and Illustrator. 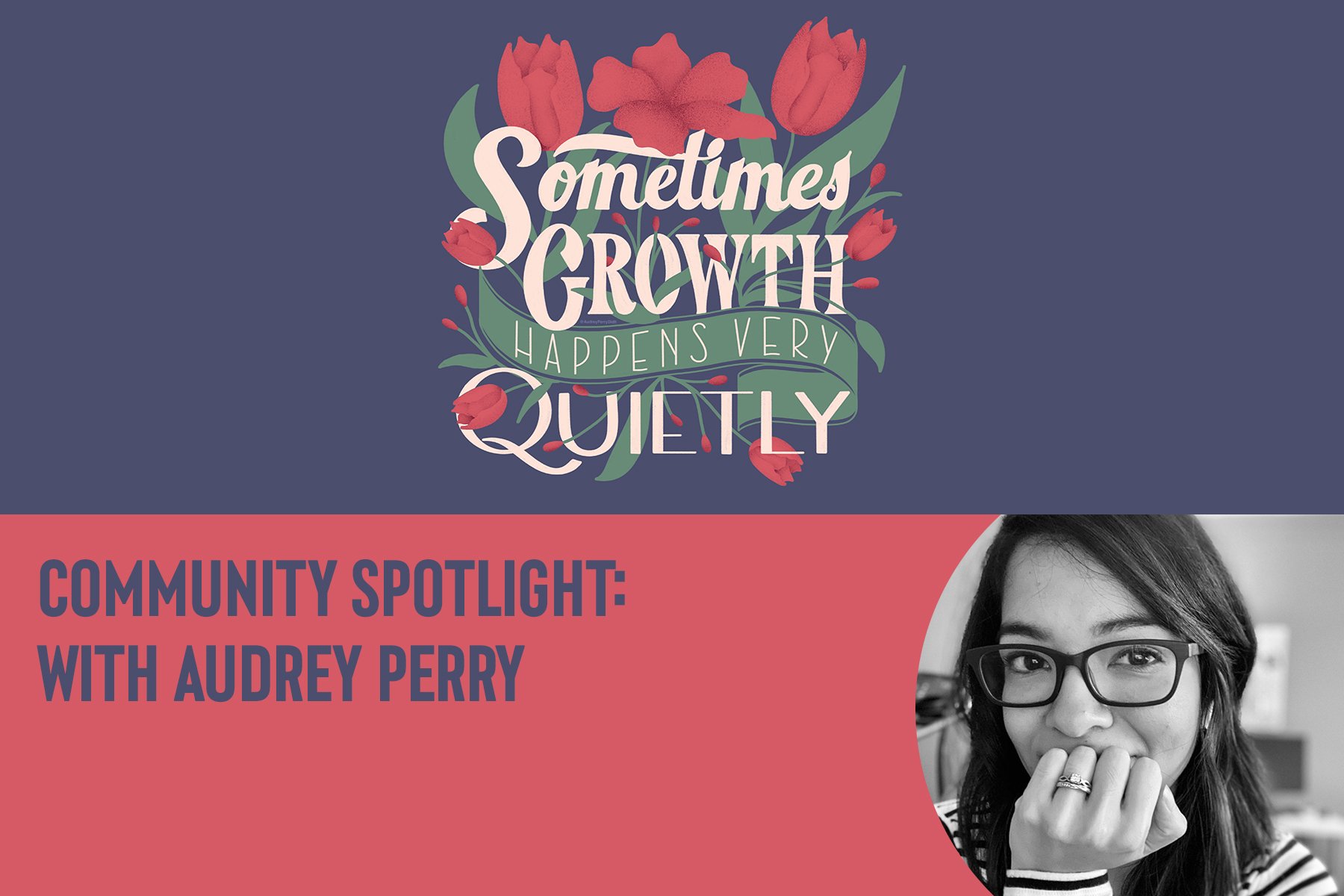 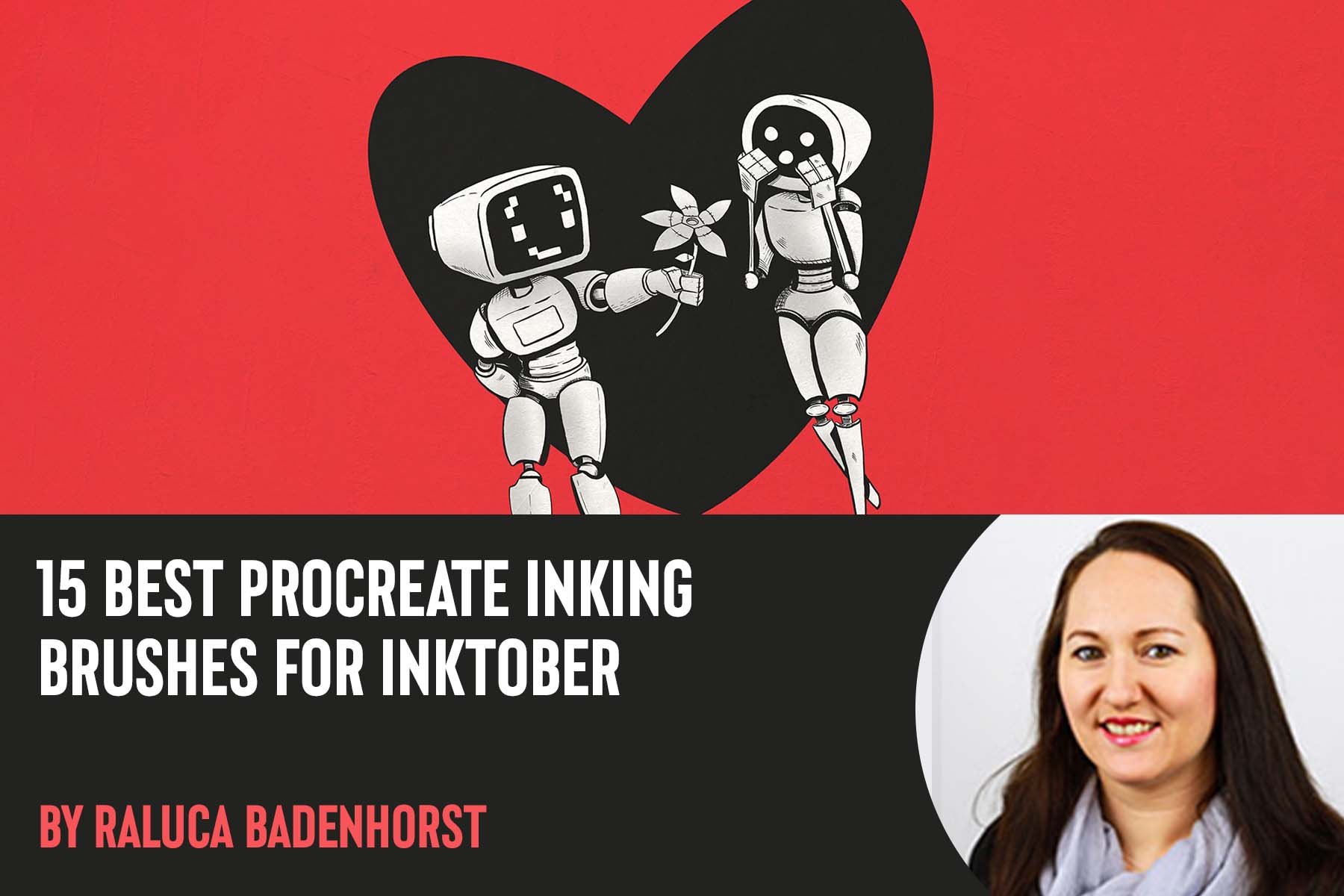