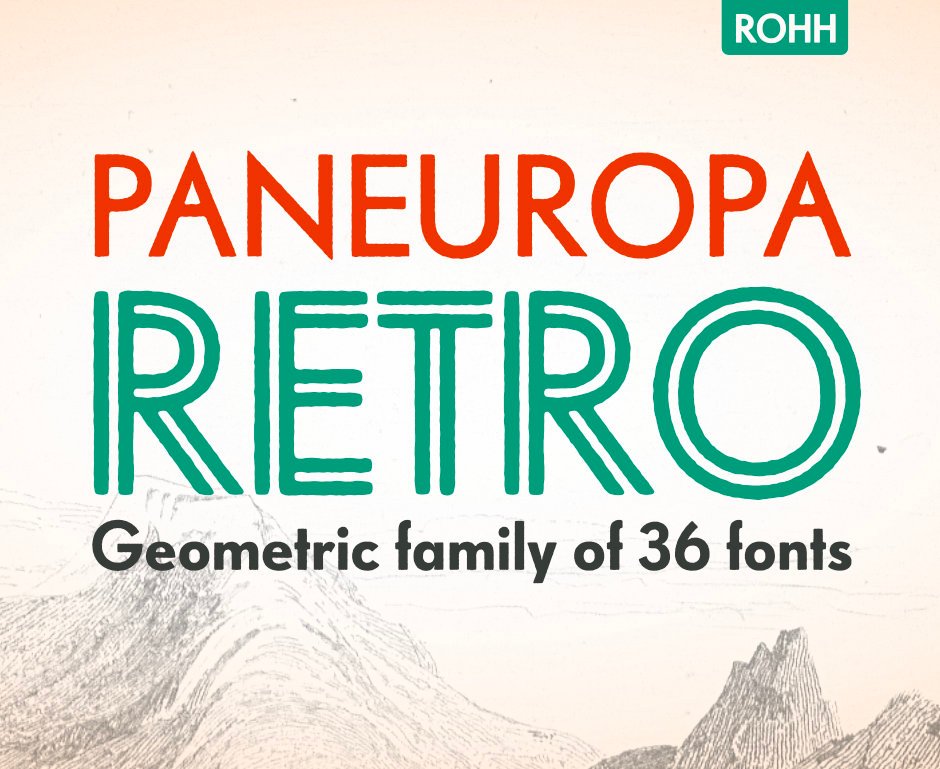 Paneuropa Retro™ is a geometric, clean and versatile font family inspired by Paneuropa – XX-century Polish classic, made by Idzikowski foundry in Warsaw, 1931. Paneuropa was a reinterpretation of Paul Renner’s famous Futura – it was a bit narrower, with different proportions and letter endings. Paneuropa had a completely different number and punctuation shapes than Futura. The family was extremely popular in Poland and was used for every kind of editorial use. Paneuropa Retro is a sibling to Paneuropa Nova™ (completely redrawn, modern version of the family with perfected letterforms, proportions and spacing, additional symbols, weights, and italics).
Retro family recreates the original typeface keeping its weights, as well as idiosyncrasies in letter shapes and spacing.

The family is very versatile. The Inline style, as well as bold and thin weights, are perfect for headlines and display use, other styles work wonderfully as paragraph text.

Paneuropa Retro’s broad variety of weights makes it suitable for headlines of all sizes, as well as for long and short paragraphs of text. It is excellent for on-screen use, for web applications, user interfaces, as well as for all kind of print purposes, like branding, packaging and editorial design.

Paneuropa Retro consists of 36 fonts – 5 weights + Inline style and their corresponding italics in three versions. It has extended support for Latin languages, as well as a broad number of OpenType features, such as case sensitive forms, fractions, superscript and subscript, ordinals, currencies, and symbols.

• Letter shapes and proportions are close to the original to keep the retro feel
• Readjusted spacing for a retro feel
• Weights are taken from the original (Thin, Regular, Bold), two in between weights are added (Light, DemiBold); Italics added
• Additional style – Paneuropa Inline – great for display use (also existent in original typeface)
• Three different versions of each font: Retro (with slightly softened edges), Soft (with soft external and internal edges), and Rough.