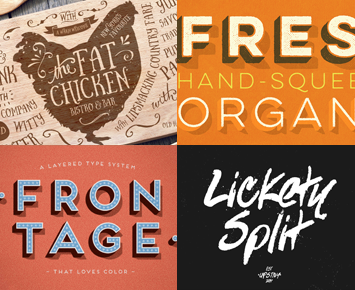 This massive font bundle brings you a stellar collection of best-selling creative fonts, with huge variety and endless creative potential. The bundle includes creative extras packs, web fonts and fully extended licensing. This is your chance to enjoy a mix of classic, enduringly popular fonts, as well as all new best-sellers, all for 92% off. 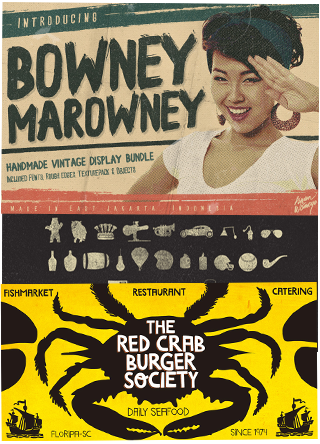 Our last font bundle was our most popular yet, so we really pulled out all the stops with this all new collection. We’ve taken on board your feedback, and put together a huge collection of 12 best-selling creative fonts.

These fonts are seriously beautiful, and there is a ton of variety for you to enjoy. We’ve included some all time classic creative fonts (including some we’ve had our eye on for ages), along with some all new recent best-sellers (including an exclusive font launch from a very popular designer). Of course like always, we’ve included tons of extras, web fonts and extended licensing at no extra cost to you. Oh, and you can get everything for a whopping 92% off.

Here’s why we think you’ll love using these fonts:

The Design Cuts team has been having a blast using these fonts. They’re really versatile, and incredible useful across a huge range of projects. Take a look below:

You don’t just get a font , you get a font AND a fabulous selection of handy extras to help you along your way, and to boost your creativity …this is what you’ll be getting :

2.) The Butcher and Block Extras font (.otf )- which includes 28 carefully styled, handy catchwords and elements to compliment your typography and make your designs pop.

4.) A short and sweet tutorial to show you how I added the texture effects to my previews with layer masks in Photoshop Cs5 – so easy you’ll have it done in less than 3 minutes :)

5.) The original files for the ‘Butcher and Block’ Pork Typo Design (Ai,psd) AND the Fat Chicken Board Typo Design (psd) – so you can scrutinise over how its done, and create something similar yourself!

6.) 4 bonus high res black and white texture jpgs for you to play with :)

I’m very excited to say that Yellow Design Studio’s new Lulo font is being launched here, exclusively as part of this bundle. Once the bundle has concluded, this font will be selling at it’s full price of $49. By grabbing it here, you’ll not only own it before anyone else, but you will also get it for a vast discount, as well owning the other 11 creative fonts in this collection.

Lulo from Yellow Design Studio is a textured, retro, amazingly 3-dimensional font family. Endless effects can be created by adding different colors to each of the 5 stackable layers. Lulo is all-caps, and has subtle texture variation between the upper and lowercase characters so duplicate distressing in double-letters can be avoided. Other features include regular and bold weights, high-resolution texture that looks great even at large sizes, and extensive language support.

CA Postal is a cute and clever little stamp-font.

It was originally intended for a record-cover only, but when the artist wanted all lyrics printed in the booklet, it was time for a font. The initial inspiration was a moveable-stamp printing-set, which had a nice Futura-like style, being very pleasant to read, especially in small sizes. But of course it’s the loose and irregular outlines that give the font its special charms.

CA Postal features two sets of characters and the “Contextual Alternates” feature will make sure that never two identical characters will stand next to each other, so that the stamp-look becomes even more authentic.

Proud to share one of my most well received fonts! It was made by drawing each glyph on 3″x5″ index cards, scanning, tracing, refining, and testing. There is wide international support and a webfont kit is included in the download.

An international, woodblock-type version of my font Ostrich Sans! 300+ glyphs in both regular and italic make this the best version of Ostrich Sans yet!

A beautifully hand-printed look for an extended bold sans-serif font! While the font is technically “all caps” the uppercase and lowercase glyphs have different ink patterns.

Frontage is a charming layered type system with endless design possibilities using different combinations of fonts and colors. Achieve a realistic 3D effect by adding the shadow font or just use the capital letters of the regular and bold cut for stark artwork.

The typeface’s design is based on a simple grid which creates the friendly, handcrafted look of facade signs. It is generously spaced for maximum impact of your message.

As a display typeface Frontage loves color and is suitable for headlines and logotypes. Details include 224 characters in six styles and manually edited kerning.

There are 224 glyphs, to give Alpha a truly authentic hand-drawn feel.

This is good for logo, labels, print for modern vintage feel, handwritten font by Maghrib.

A solid bold handmade ink stroke, made from the cigarette filter’s sponge that I dipped into ink, and used as a writing tool. Inspired from a sign painting, but given a rougher appearance. Available in OTF and TTF files with All Caps Style, Numbers, Punctuations, Accents (Opentype Standard Encoding) with 200+ glyphs on it. Good for headline ads or some brand display

A thin rough handmade ink stroke, made from the bold markers written on the old paper so the edges are blurry. Available in OTF and TTF files with Uppercase, Lowercase, Numbers, Punctuations, Accents (Opentype Standard Encoding) with 200+ glyphs on it.

A vintage and handmade illustration that present the vintage things, absolutely clicked with commons vintage/oldschool design. Available in AI, EPS and PDF

This font is packed with lots of contextual and stylistic alternates that automatically transmogrifies :) the letters as you write (opentype savvy programs needed!). You can also pick the alternates by hand and set the text the way you like better. The choice is yours, and there are really plenty of alternates to choose from and create original handlettered-looking designs.

The font also brings a set of rough pictures based on charcoal sketches from Shniedewend & Lee Company, circa 1888. These were hand painted using the same thin brush as the letters, making them a natural complement.

Rather Jazzy, Rather Loud: a family of two quite distinct fonts that perform together handsomely well!

Both fonts include 2 versions for each letter, easily reachable through keyboard upper and lower keys. They come packed with Contextual Alternates functionality to instantly cycle the alternates, providing a realistic handcrafted feel: just turn on the feature in any OpenType savvy application and let the music sound. Rather Loud brings yet another cool feature: lots of interlocking pairs that will add that nice extra twist when your projects ask for. Trigger the discretionary ligatures button or pick up your choices through a glyphs palette.

I’d Rather Both, for sure!

Marujo is a highly decorative typeface inspired by painted pieces of Arthur Bispo do Rosário, a striking Brazilian artist who lived for 50 years in a psychiatric institution.

Besides its spirited Regular and Light cuts, Marujo family brings nifty eye-catching variations adorned with dots and stripes. It also brings complementary fonts to spice things up even more: there are 2 shadow options and yet a picture font packed with doodles, mostly on nautical subjects (which are strongly present on Bispo do Rosário, a former seaman apprentice.)

Bispo do Rosário’s works employs a multitude of materials and are often very intricate. Words are everywhere, painted or embroidered at most. He produced a vast amount of works, and is now – posthumously – widely recognized in Brazilian art scene. The psychiatric institution in which he lived is now a museum dedicated exclusively to his work.

Marujo draws inspiration not only from Bispo’s works, but also from this man’s potency, a persistent man who produced amazing art locked in such a tough environment for a life-long.

Marujo fonts are positively adventurous and will safely navigate through a sea of feelings, reaching free spirits everywhere. To navigate is precise…

This deal includes extended licensing. This means that as well as using these resources within personal and commercial projects, you can also use them in designs/products that you resell. Here is some further clarification: 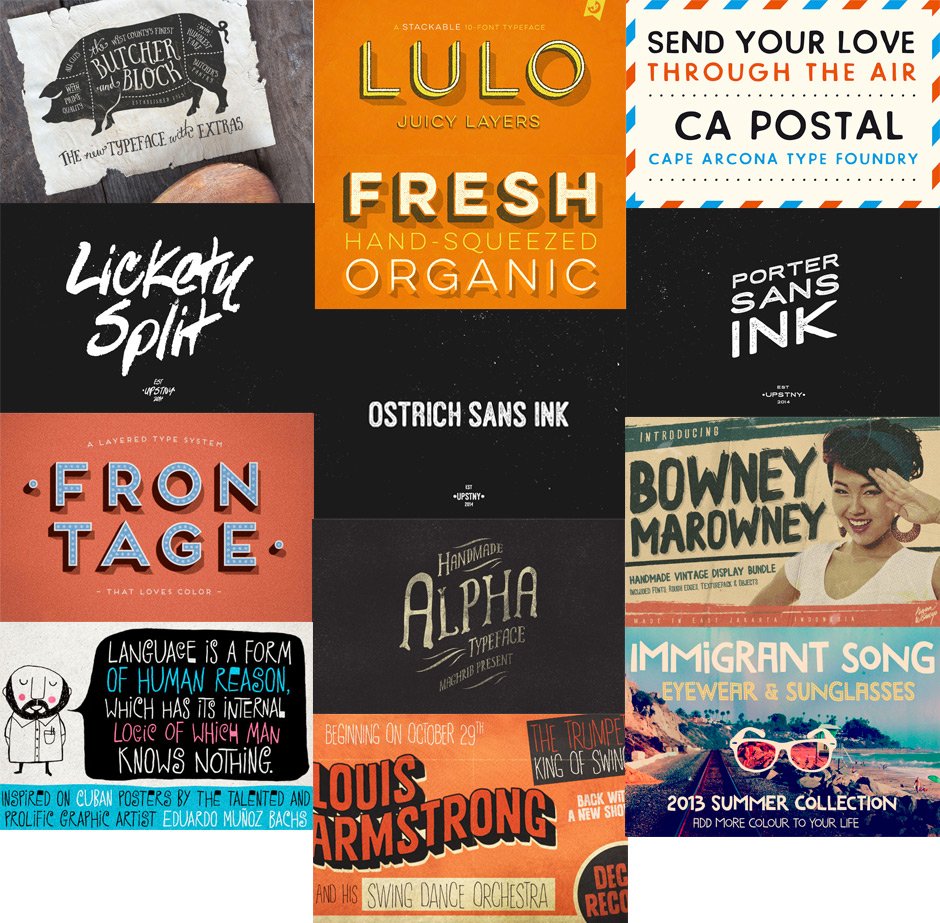 After many community requests, we’re including a useful .pdf browsing guide. This allows you to easily see which fonts are included in each folder, without having to refer back to this deal page. (This is included with your deal download). 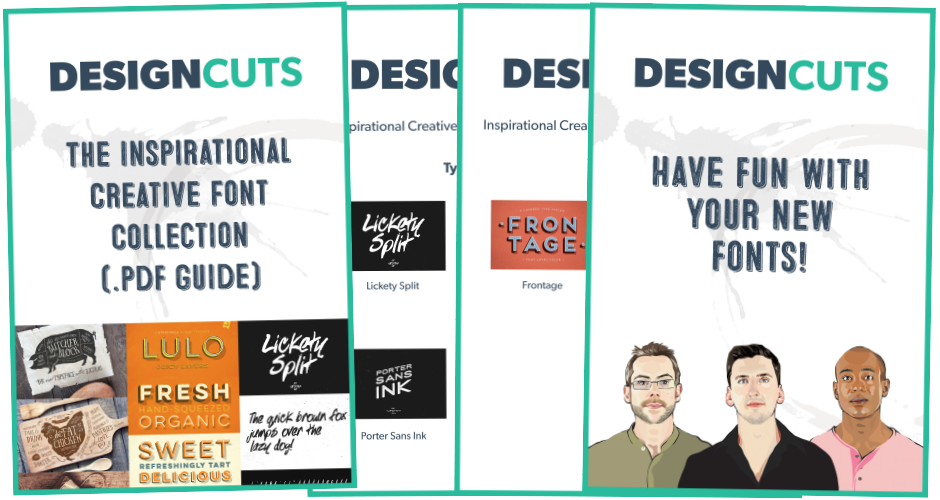 123 lovely comments from our community