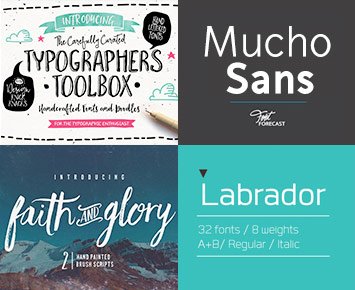 This is our biggest font bundle yet, bringing you 33 top quality fonts, from some of the world’s greatest designers and foundries. We’ve included clean, calligraphic, hand-drawn, retro and professional style fonts – all with web fonts and extended licensing. Best of all, you can save $2500 on this epic selection! 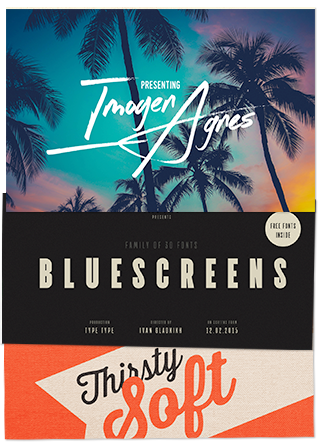 Refresh Your Font Library With Quality, Variety and Value: 33 Best-Selling Fonts at 99% Off.

The Typographer’s Dream Bundle is exactly what I wish I had back in my freelancing days.

This may sound like a familiar story. Whenever I needed a fresh new font for a project, I would hit up the top font websites, and begin the search. I remember browsing fonts by keywords, tags, categories and best-seller lists. Many hours and thousands of fonts later, I would arrive at a final shortlist of my favourites. Most projects required at least one supporting font, so I would begin the painstaking process again. Once I had my two shortlists, I’d often realise that as beautiful as my primary and secondary font selections were, they simply didn’t go together.

As designers, we know the hundreds of dollars price point for perfectly complimentary, quality fonts is justified. However, it turns out when you’re working with a client’s budget, they rarely share your passion for kerning and letter x-heights!

This bundle cuts out that exhaustive research phase, and gives you a ready to use, gorgeous font collection, without the hefty price tag.

Here’s why this is a font geek’s dream:

This bundle is massive and you can see an overview of all the incredible fonts included below. We definitely recommend scrolling down this entire page, as it’s the best way to see all of the value on offer. 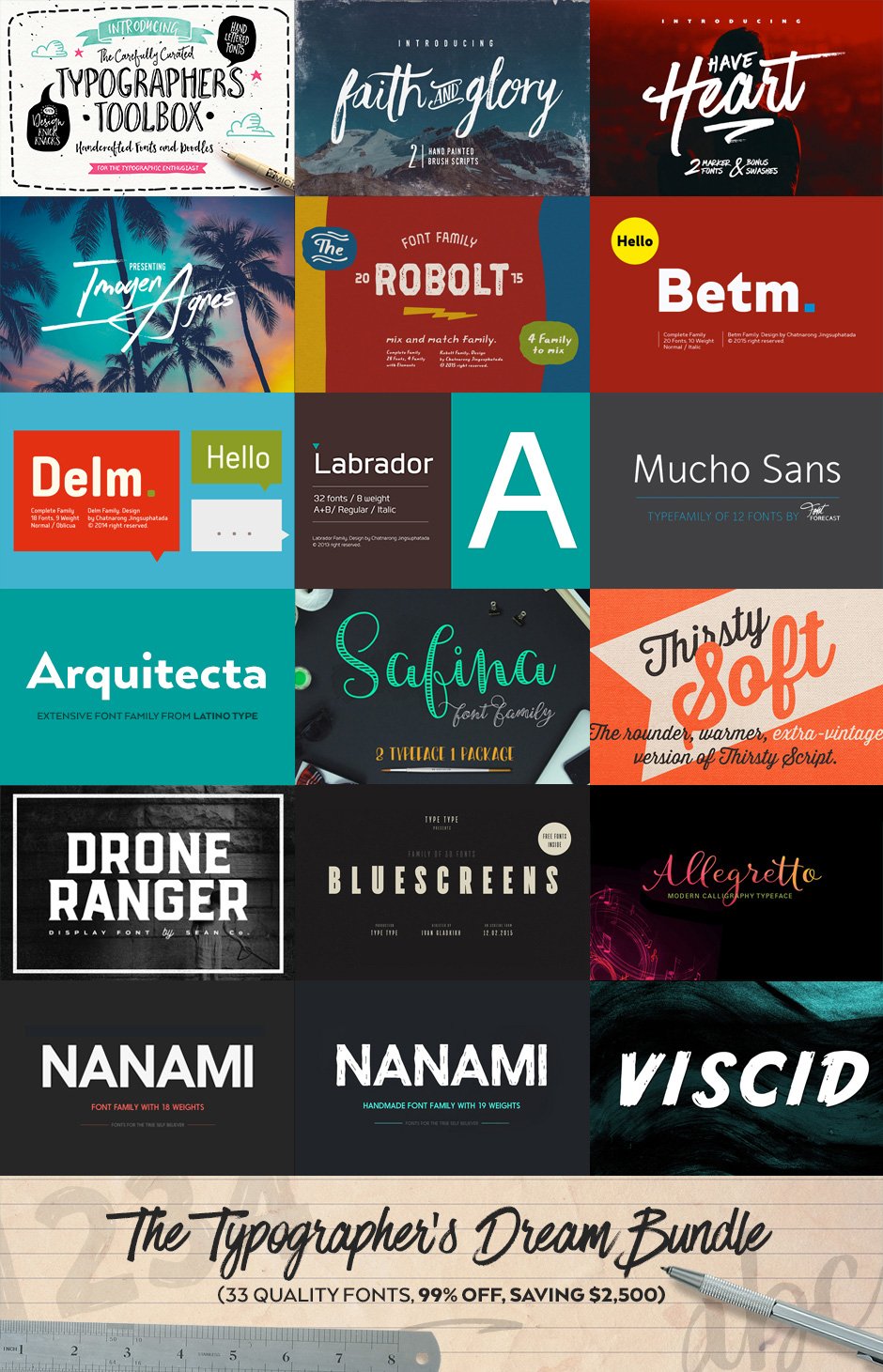 As a self-confessed handlettering-aholic, I’ve been itching to make a super-reliable pre-packed set of go-to hand-lettered fonts that suit each other well when paired together.

So here it finally is, after months of deliberation, lettering, sketching, inking, painting, brushing, drawing, scanning and digitising, the final much awaited outcome: The Typographic Designer’s companion, the all new Carefully Curated Typographers Toolbox.

A pack of 16 lovingly-crafted, hand-lettered and brushed fonts that have been created carefully to blend harmoniously together in your typographic designs and projects.

To make your designs even more typ-o-licious, this pack also includes a super-handy set of over 80 hand-doodled illustrations – designed to fit right in with the fonts and your typographic masterpieces.

• Bacon Sandwich: A no-nonsense uppercase, sans-serif typeface done with a broad-tip fine-liner.
• Fish & Chips: A jaunty, playful, tall uppercase font set, made with a thin felt tip.
• Fox & Bear: A cute and charming uppercase font with varying thickness in its letters.
• Gingerbuck: An unshaded quirky font with thin inky edges.
• Habaneros: A casual brush painted font, with varying brush pressure, and watery lines.
• Handsome Hand: A hand lettered calligraphy script made with a good old fashioned nib and ink, and irregular baselines, with a touch of refinement frivolity.
• Heartstrings: A playful tall font with sharp lines of varying thickness and a haphazard baseline.
• Hunterswood: A blockish san serif font made with a thick tip square marker, and a little love and care.
• Lemon Squeeze: A messy hand brushed font painted with haste and abandon!
• Mustache: A super cute and playful inky script with a touch of mischief.
• Rembrandt: A thin painted dry brush script with flamboyance and a rebellious personality.
• Shopaholics: A jovial sans serif jotted font with a loud boastful character.
• Stalemates: A smooth monoline script with inky imperfections, and a tall physique.
• Stringbeans: A little 3D and a little inky, with round edges and a fine tip.
• Sugarbush: A hand lettered calligraphy type script, with a few inky imperfections and wobbles.
• Zanjeros: A tall uppercase brush script with messy edges and a playful nature.

2.) A super handy set of vector based Illustrated bits and bobs to compliment the font set – and the designs you make with them – available in .PSD/.EPS and .AI

Faith and Glory is a set of 2 hand-painted brush fonts, designed to perfectly combine with one another and allow you to create beautiful typography with a personal touch.

Alternates are available for key characters, you can access these by switching between upper & lower case characters within the 2 fonts.

Have Heart is a set of 2 hand-made marker pen fonts, designed to combine perfectly and allow you to create stunning hand-lettering quickly and easily. Also included is a set of 12 bonus swashes, ideal for giving your text that final touch of finesse.

TTF and OTF files are included for all 3 fonts.

A bit of background: During my years as a freelance designer, I had always been a huge fan of signature-style fonts but frustratingly found them few and far between. Now don’t get me wrong – some of them are visually stunning. But I found them almost too perfect, or too digitised, to make you think that someone had quickly scribbled it down on paper.

Robolt consists of four designs with multiple options to add variety and playfulness. The first two families, Battery and Machine, were made with a retro touch which makes them look like some of those toy labels from the 80s. The third family, Vintage, is rendered in a Didot style with different textures to choose from. The fourth and final family, Streamlined Handdrawn, is a contrast to the solid types. Additional elements are also available to complement the letters.

Delm is a sans serif with a geometric, modern look. It is developed in 9 separate weights ranging from Hairline to Black, each with corresponding slanted versions, called ‘Oblicua’.

Delm is a font made with dedication. You can rely on this typeface to create a brand identity, typographic posters, signboards, instruction plates, etc. Delm will inspire you to try different designs, be it printed or on-screen. Websites, banners, applications and e-books are places where Delm will show its best because of its originality and enhanced legibility.

Labrador is a sans-serif that is a elegant, modern, thin, rounded and clean.

Mucho Sans is a geometric sans serif type family that comes in six weights with matching italics. The design is very clean, yet friendly and modern. This is a contemporary versatile type family that is excellently suited for both display and text uses. It also supports a wide range of languages. Mucho Sans is equipped with many Opentype features such as five numeral styles, numerators, denominators, superiors, inferiors, automatic fractions, alternative a and g, case sensitive forms and ordinals.

Inspired by American & European hand lettering from the first half of the past century, Arquitecta finds its own space as a great alternative for paragraphs in front of classics like Futura, Kabel or Avant Garde.

The family contains 8 upright romans and 8 italics with the following features:

Safina is a hand lettering typeface font with a blend of beauty, softness and elegance.

Everything is complete with uppercase, lowercase, numbers, punctuation, symbols and international language support. Please note, Safina Book is uppercase, punctuation and numbers only.

Thirsty Soft from Yellow Design Studio is the rounder, warmer, extra-vintage version of Thirsty Script. While the original Thirsty Script has a caffeinated look with sharp edges and pointed terminals, Thirsty Soft is warm and buttery smooth, adding friendliness and and extra level of vintage appeal.

Tips:
– In Photoshop switching the anti-aliasing setting to “smooth” may yield the best results.

Drone Ranger is a geometric display family that includes 9 various styles for your design needs. Included in the family is a Sans version, a Serif version, and a Special Decorative version, and each of these have their own clean, oblique, and inked styles.

Blockbusters, posters, titles and movie trailers; we have created the perfect font family for your cinematic projects. Bluescreens is a high-quality font family which is designed specifically for cinephiles and directors. Condensed style contains five most popular typefaces: Thin, Light, Regular, Bold, Black and Italics.

A modern calligraphy typeface with a playful, yet elegant style, inspired by Mozart’s “Rondo Alla Turca” and his other compositions played with an allegretto tempo.

The font contains more than 1000 glyphs. Each letter in the typeface has few different swashes that can be accessed via the glyphs panel of your OpenType-aware application such as Adobe Illustrator, Adobe InDesign, MS Word.

Nanami is a brand new Japanese inspired type family. Originally influenced by early swiss geometric-style sans serif faces that were popular throughout Japan during the 1970s. Nanami consist of 18 individual weights ranging from Thin through to Black. It also has extensive support for over 27 languages, and as a font family that works well both in headlines and body copy, Nanami is the perfect choice for a whole variety of creative briefs.

Nanami Handmade carries a quirky, mischievous charm. The font comes in two styles, solid and hand-drawn, each of which has eight weights. These sans-serif styles work well in small and large sizes, both on and off screen.

Viscid is painterly font based on styles found in old sign writers manuals. Painted using thick gloss paint strokes, it has imperfections for a handmade retro feel. It’s place is either on posters, billboards or somewhere it can  scream and shout.

Here’s another look at the awesome resources included in this bundle: 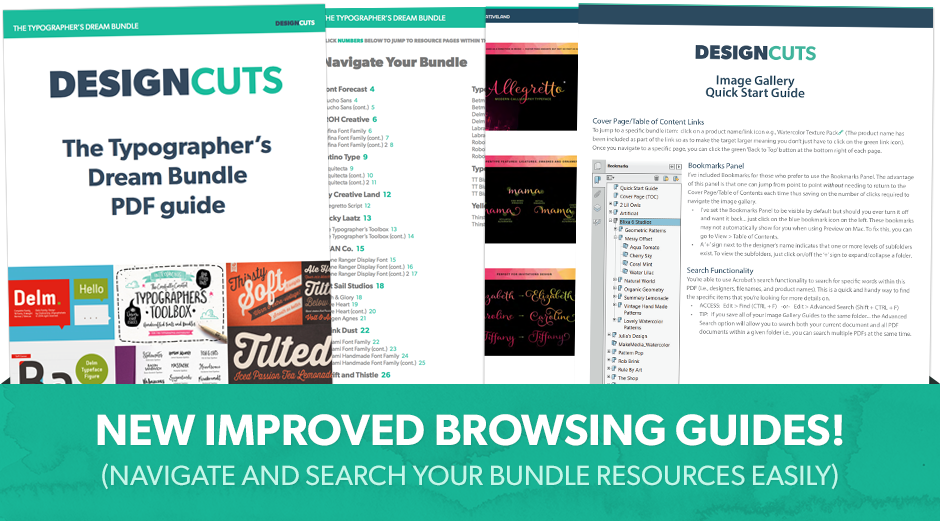 253 lovely comments from our community