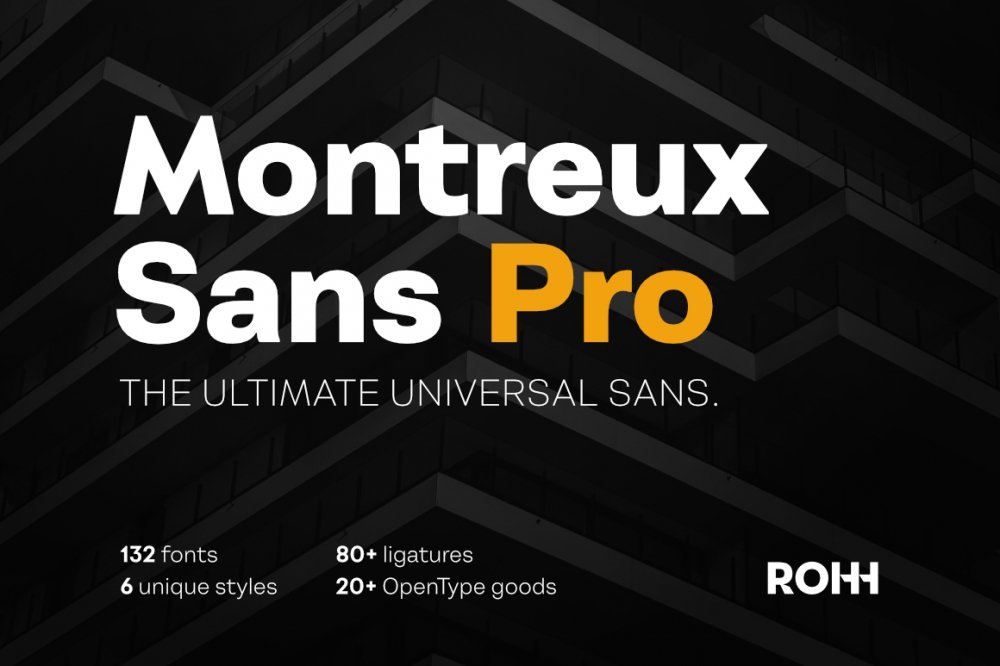 Montreux Sans Pro™ is an ultra-versatile modern grotesk superfamily of 132 fonts. It takes its inspiration from Swiss design but stands apart as beautifully distinct. Its unique personality is shown in the small contemporary details, modern and dynamic letterforms and more geometric approach to overall proportions.

Montreux family was designed for all contemporary branding needs. It features over 80 ligatures including broad selection of uppercase ligatures for use in logo design and creative headlines. Carefully crafted proportions and spacing give the typeface excellent legibility that make it perfect also for paragraph text as well as user interfaces.

Classic – more neutral, paying homage to the famous and beloved Swiss design typefaces, such as Haas Grotesk or Helvetica; Montreux Classic is successful in most commercial areas such as finance, banking, health, IT or legal environments.

Jazz – the most playful and rounded style, shines when used in lifestyle design – such as food/drink, cosmetics, tourism, and fashion; Given its friendly nature, it can also be used for advertising products for the youth.

All these 3 subfamilies have their soft versions with rounded corners, giving the fonts more gentle and organic feel. Montreux contains also the Outline fonts of each style, giving a total of 12 Outline styles (6 upright and 6 italic).

Montreux Sans Pro™ superfamily consists of 11 weights (from Hairline to Black, including Outline) with corresponding oblique styles, that gives total of 132 styles. Both Oblique and Italic styles were hand drawn to get sharp, consistent and fine letter shapes. It has extended language support, as well as a broad number of OpenType features, such as case sensitive forms, standard and discretionary ligatures, stylistic sets, contextual alternates, lining, old-style, tabular and circled figures, slashed zero, fractions, superscript and subscript, ordinals, currencies, and symbols. This product is exclusive to Design Cuts and has not been featured in a past deal.